Nagpur 10 Aug : A single political group, an organization, or even an individual leader will not create changes in the community, claimed Rashtriya Swayamsevak Sangh supremo Mohan Bhagwat.In his speech at the book’s release ceremony of “Varta Ishanya Bharatchi’ (Commentary on Northeastern India) composed by RSS functionary Sunil Kitkaru, Bhagwat pointed out that India gained Independence only after the masses began to take to the streets. 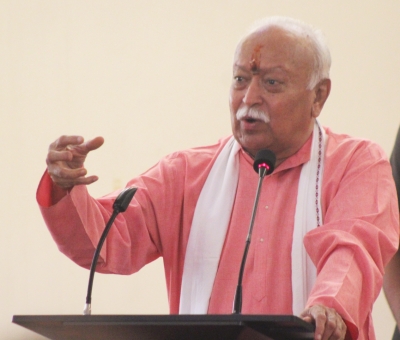 Bhagwat stated that changes are only possible when people in general are actively involved.People who live in an organization should not be weak.

The awakening of the Hindu community members to understand their individual responsibility is the necessity of the moment.Every person in the society must have self-esteem, moral values integrity, patriotism, integrity and discipline to fulfill their duty in creating a moral and a true society.

“The Hindus need to be strong, and the Sangh will work to bring everyone with them,” he claimed and added that the Sangh would like the Hindu community to be strong enough to solve its issues.This cannot be achieved by a single leader.

Instead, it’s an entire organization that can accomplish the objective according to the RSS boss stated, and pointed out that an awakened and enlightened society will keep the nation in a state of alert and ready to take on any obstacles.

The revolutionaries also participated in the struggle for freedom, as did leaders such as Subhash Chandra Bose.

Bhagwat said, that not everyone was in prison, but some stayed out.