Abu Dhabi, Jan 16 : One of the most exciting young players in the UAE national team, Muhammad Waseem fulfilled a major goal of his promising career — to play with some of the big stars involved with the Mumbai Indians family. 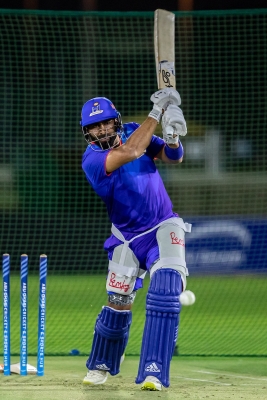 His dream was fulfilled when he got the opportunity to represent MI Emirates in the inaugural edition of the ILT20.

The fact that MI Emirates is led by West Indies star Kieron Pollard, one of the most feared batters in the T20 format, is a bonus for the 28-year-old right-hander.

“The kind of captain Pollard is, he treats everyone well and gives us all confidence.I had heard a lot about him.But ever since I met him, he has always backed me and given me confidence,” he said.

“I get more confidence when I am backed by players such as Dwayne Bravo, Pollard, Nicholas Pooran and more importantly the MI Emirates team management,” he added.

He heaped praise on Pollard for his captaincy and credited him for his inspiring words before the match for a power-packed performance against Sharjah Warriors in MI Emirates’ campaign opener.

“Pollard’s captaincy had a big role in helping me perform.The kind of confidence and support he gave me inspired me to perform well,” the young batter said.

Commenting on the performance of the MI Emirates batting line-up, especially his 79-run partnership for the third wicket with Nicholas Pooran in the opening match, Waseem said, “It (the performance) was a result of the kind of practice and training we underwent in the build-up to the tournament.Earlier I used to go all out from the word go, but in the first match, I and Pooran decided to access the conditions and the bowlers, before getting into the groove.

“I have played with Pooran in the past too, he is an experienced campaigner and batting with him boosts my confidence.In the last match, the conditions were windy but we were confident that the way we were batting if we manage to connect our shots properly, the ball will go beyond the boundary,” he added.

Waseem also expressed his interest in rolling his arms if Pollard and the MI Emirates team management want to utilise his services.”I like to take responsibility and if given a chance will like to bowl also in the future,” he said.

As the MI Emirates prepare to take on the same opponents (Sharjah Warriors) in Sharjah on Tuesday, Waseem said the team will look forward to continuing in the same vein.

“We’ll look forward to winning by an even bigger margin in the next game, and try to seize the momentum,” he said.

ITT20: When I Got To Know I Will Play Under Pollard, My Happiness Doubled, Says MI Emirates\' Muhammad Waseem - Doubled, Emirates, Happiness, Muhammad, Mumbai, Pollard, Waseem

ITT20: When I Got To Know I Will Play Under Pollard

ITT20: When I Got To Know I Will Play Under Pollard, My Happiness Doubled, Says MI Emirates' Muhammad Waseem