By Niharika RainaNew Delhi, Dec 3 : Former India leg-spinner Laxman Sivaramakrishnan said in absence of Kuldeep Yadav and Yuzvendra Chahal from the upcoming ODI series against Bangladesh, he would pick Axar Patel for Sunday’s first match of the series at the Sher-e-Bangla National Cricket Stadium (SBNCS) in Mirpur, Dhaka. 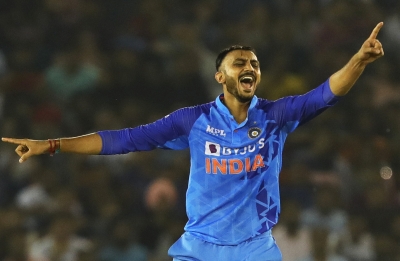 Axar Patel had a forgettable time in the T20 World Cup in Australia, going for 8.62 runs per over, and took only three wickets in the tournament.With Ravindra Jadeja unavailable for the ODIs due to injury and no Kuldeep-Chahal around, Patel could look to be the lead spinner alongside Washington Sundar for ODIs against Bangladesh.

“For me, I will pick Axar, who’s a good cricketing brain as well.Despite being talented, he knows his limitations.

He knows he is not a big turner of the ball.He bowls a good line and length and is a sharp cricketing mind.He knows how to get wickets by tying them down and bowls a really good arm ball.”

“I would pick Axar as he’s got the ability to bat, is aware of the match situation, and doesn’t get under pressure most of the time.But somebody like Shahbaz (Ahmed, fellow left-arm spin all-rounder), you might think, yes Bangladesh.But don’t take them lightly as one knows what happened in 2007,” he said to IANS in an exclusive interaction organised by Sony Sports Network.

Interestingly, both India and Bangladesh haven’t picked a specialist wrist-spinner for the upcoming ODI series.Both Kuldeep and Chahal used to be automatic picks for India till they proved to be very expensive against England in the league stage.Since then, their ODI careers have gone in different directions.

“As far as Kuldeep and Chahal are concerned, Kuldeep cried after he was carted all over the park (by Moeen Ali for 26 runs off five balls in IPL 2019) and everyone went after him post that point in the game.As the batters went after him, they hit a couple of sixes and put his morale down.About Chahal, how much success he has been in the 50-over format in the recent past? You can be economical in the middle overs like I spoke about Washington Sundar,” added Sivaramakrishnan.

He also cited an example from his playing days, where he tried to highlight how India need to show trust in the skills of Kuldeep and Chahal in ODIs to get wickets in middle overs.

“When I played World Championship of Cricket in 1985, Sunil Gavaskar gave me the license and said, ‘go bowl ten overs, even if you give 50-55 runs’.That was very expensive at that point in time and he said, ‘I want two-three-four wickets from you.Ravi (Shastri) will bowl with you in tandem and he will keep it tight and create that pressure.I want you to bowl for four wickets’.”

“Between mine and Ravi’s ten overs, he would say that between 20 overs from both of you, I want 100 runs and four or five wickets.I worked to break the backbone of the opposition and that happened.It was a plan, and it happened from match number one till the finals.

Apart from finals, we got every team all out under 50 overs.You need good planning, and skills and need to trust a cricketer to get you wickets.No matter how many runs you give these days, batsmen will chase it.”

With less than 12 months left for the ODI World Cup in India, Sivaramakrishnan wants India to have a winning habit by fielding their strongest possible playing eleven in all the matches in the build-up to the mega event.

“Every victory will give you confidence, the combination will settle down automatically and your processes can go out of the window.You will find a team that sets in and is high on confidence and in a match-winning habit.

“If you have 100% or 15 victories out of 20, and that too good victories, with people like Rohit Sharma, Virat Kohli, K.L Rahul coming into good form, and in the bowling department, Bumrah makes a comeback at some stage and he gets into form because what you do in a match situation is totally different from nets.”

Would Pick Axar For First ODI As He Doesn't Get Under Pressure Most Of The Time: Sivaramakrishnan

Would Pick Axar For First ODI As He Doesn't Get Under Pressure Most Of The Time: Sivaramakrishnan