Chennai, Sep 22 : Right-arm pacers Shardul Thakur and Kuldeep Sen shared seven wickets between themselves as India A beat New Zealand A by seven wickets in the first unofficial One-Day game at the MA Chidambaram Stadium in Chennai on Thursday. 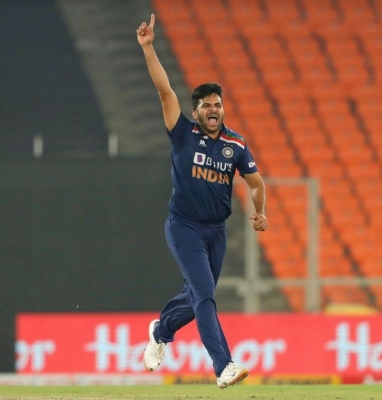 Electing to bowl first after winning the toss, India A were straightaway on top of the match as Thakur (4/32) and Sen (3/30) wreaked Havoc on New Zealand A batting line-up, who were soon bowled out for 167 in 40.2 overs.

In reply, collective contributions with the bat, led by Ruturaj Gaikwad (41) and Rajat Patidar (45 not out), meant India A chased down the total in 31.5 overs to take a 1-0 lead in three-match series.

In the morning, where the pitch had good pace and bounce, Thakur, who missed the bus for India’s squad in Men’s T20 World Cup to be held next month in Australia, castled Chad Bowes with the one swinging in late and had wicket-keeper Dane Cleaver caught off a short ball at fine leg to end his first spell of four overs with two wickets while conceding just seven runs.

Kuldeep, who was recently a net bowler for the Indian team in Men’s T20 Asia Cup in the UAE, took his first wicket by trapping Joe Carter lbw and two balls later, had Rachin Ravindra caught behind.He increased troubles piling on New Zealand ‘A’ by having Tom Bruce caught at slip as the visitors became 27/5 in 7.3 overs.

The run-out of Sean Solia, captain Robert O Donnell falling to Thakur and left-arm wrist-spinner Kuldeep Yadav taking out Logan Van Beek left New Zealand ‘A’ in danger of being bowled out for a score below 100.

Michael Rippon (61) and Joe Walker (36) added 89 runs for the ninth wicket and rescued New Zealand A from 74/8 to being 167 all out, lending some respectability to the total.Tearaway pacer Umran Malik bowled seven overs for 27 runs and did not have a scalp against his name.

In reply, opener Prithvi Shaw made a 24-ball 17, including hitting a straight six off Van Beek.But in a bid to go big, he pulled hard off a short ball, only to be caught at square leg off Matthew Fisher.

Gaikwad and Rahul Tripathi (31) put on a stand of 56 runs for the second wicket before the former fell to Rippon, giving him a simple catch off his own bowling.

In the next over, Tripathi was castled by Van Beek, which brought Rajat Patidar to the crease alongside captain Sanju Samson.

Patidar, known for his quick pace of scoring, struck an unbeaten 45 off 41 balls with the help of seven fours.

Samson, who invited loud cheers from the crowd, hit the winning runs with an fantastic six over long-on to remain unconquered on 29.The second one-day match between the two teams will happen at the same venue on Sunday.