New Delhi, Sep 22 : Emphasising on making the consumer aware about illicit and fake Products and prevent their sale, Central Board of Indirect Taxes and Customs (CBIC) Member, Sandeep Kumar on Thursday said that enforcement agencies must use digital tools to seize counterfeit products. 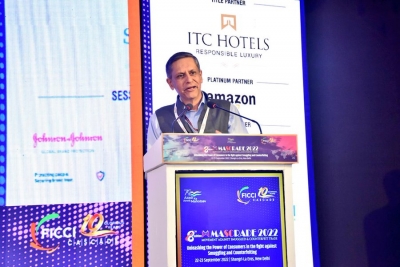 Speaking at FICCI MASCRADE 2022 summit, Kumar added that consumer awareness is paramount in ensuring that fake or illicit Products are not purchased by them.

He suggested industries and corporates to Involve citizens and harness their potential in detecting fake products.

He said that citizens should also be encouraged to report incidents of fake and illicit Products being sold in markets to enforcement agencies.

Consumers should also reject such Products, he added.

Former Vice-President M.Venkaiah Naidu, who was the chief guest in the conference, said that illicit trade is being undertaken by India’s “immediate neighbouring countries”.

He suggested that strong action must be taken against such forces.

FICCI President Sanjiv Mehta said that a counter-attack should be launched on fake products.