New Delhi, Aug 19 : The Central Bureau of Investigation (CBI) on Friday, seized evidence-based documents and devices from the home of Delhi’s deputy chief minister Manish Sisodia during an investigation in connection with allegations of violations in the Delhi Excise Policy.The raids were also taking place in 20 other locations in seven states. 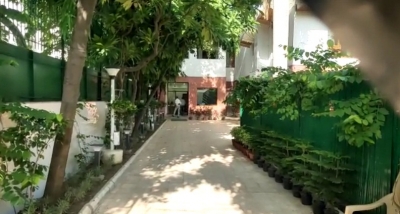 The CBI confiscated certain documents in the presence of an official witness.The process was carried out with the full legal procedure to avoid any dispute in the future, according to an official.

“Seizure memo was signed in the presence of an official witness.We are still searching for the location,” said the source.

The team also scans various documents at his residence and has also interrogated Sisodia sources said.

The CBI teams also raided the home of ex-Excess Commissioner E.Gopikrishan, four public servants and other.

The raids are currently taking place in seven states, and may continue until the evening according to an insider.

In the earlier hours in the day Sisodia said earlier in the morning that he was innocent, and that the CBI was working under the direction of the Centre.

“CBI is here.They are very welcome.We are very honest.We are shaping the lives of millions of children.It’s very sad that people who are doing great job in the country are being criticized in this manner.This is the reason why our country hasn’t been ranked number one,” Manish Sisodia tweeted in Hindi.

Sisodia continued to say that they would give them the full collaboration in the investigation, so that the truth will come out in the near future.

He said that until now several cases had been filed against him , but nothing was revealed.

“Nothing will be the result of it, either.My work is not going to stop.to ensure that there is a good education in the country.

“These people are irritated by the great job of Delhi’s education system and health.This is the reason why Health Minister and Education Minister of Delhi have been snared to ensure that the great work of education and health can be put on hold,” Sisodia said in his tweet.

In the meantime, BJP leader Kapil Mishra has accused Sisodia of corruption.

“Corruption of Satyendra Jain has been discovered, Sisodia’s scams are now being brought in the eyes of the general public.

“The case of the loot of millions of rupees in the name of liquor contracts is just the beginning.Our fight against corruption of Kejriwal’s government is underway, and the people who stole Delhi will be sent to prison,” Mishra tweeted.