Hyderabad, Nov 28 : Arjun Deshwal got his 600th raid point in the league on a day when his team defeated Telugu Titans 48-28 at the Gachibowli Indoor Stadium here on Monday. 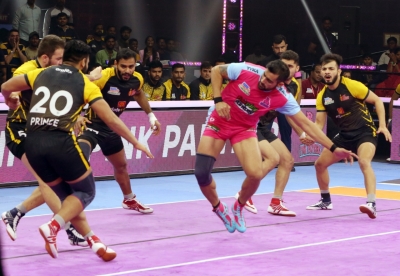 Deshwal’s 18-point game was enough for Jaipur to move up to the second place, one point ahead of Bengaluru Bulls.

The Titans haven’t had the best of seasons and they couldn’t find a way to get going in this game either.Despite their defence, for once managing to match their opponents, their raiders let them down.

In the absence of Siddharth Desai, Abhishek Singh was mostly stranded up front.

At the other end, the Pink Panthers’ talisman Arjun Deshwal continued his rock solid form as he notched up a SUPER RAID catching out Vishal Bhardwaj, Parvesh Bhainswal and Prince D to leave the Titans on the verge of an early all out.The first ALL OUT duly followed soon after as the Pink Panthers surged into a 14-7 lead.The teams went into the break with Jaipur leading 20-12.

The Pink Panthers continued unabated in the second half and within the first ten minutes of the period had already subjected the Titans to two more ALL OUTS, the second extending the lead to 39-17.For a brief while, the Titans looked competitive, and even had Jaipur on the ropes with only three men on the mat.

Moments later, the Titans salvaged some pride with an ALL OUT, but it proved consolatory as the Pink Panthers romped to another big victory.