Bhubaneswar, Dec 5 : Over 80 per cent polling was recorded in by-poll to Padampur assembly constituency in Odisha’s Bargarh district, an Election Commission official said. 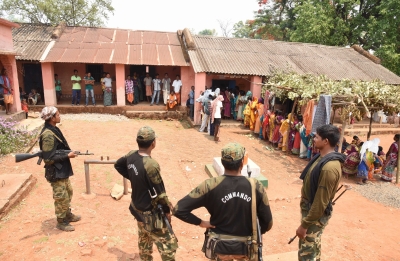 The voting for the by-poll was conducted smoothly at 319 polling stations under tight security arrangements.

Out of 2.57 lakh voters, including 12 members of the transgender community, were eligible to exercise their franchise in the by-poll.

Voting was partially disrupted in a few booths due to technical snag in the EVM.Voting, however, remained smooth and peaceful in all the other booths during the by-poll, said Odisha’s chief electoral officer (CEO) SK Lohani.

“We have deployed sufficient police force in the strong room.Three layers of security arrangements have been made in and around the strong room,” said Bargarh Collector Monisha Banerjee.

Votes will be counted on December 8.Counting will start at 8 a.m.at 14 tables.The counting will be done in 23 rounds, she said.

The BJP has nominated Pradip Purohit, who had won the seat in 2014 but lost to BJD’s Bijaya Ranjan Singh Bariha in 2019 with a margin of 5,734 votes.Congress fielded three-time MLA Satya Bhusan Sahu.

The by-election assumes significance in the wake of the BJD’s loss in Dhamnagar, its first such defeat since 2009.

This election result would indicate if electoral scales were tilting against the Naveen Patnaik-led BJD ahead of the 2024 state elections.

Over 80% Polling In Odisha's Padampur By-poll

Over 80% Polling In Odisha's Padampur By-poll