Los Angeles, Aug 17 : After Colorado River Basin states failed to meet the deadline for drought reductions in emergency situations in the last week of August, the US Bureau of Reclamation said it will continue working with affected tribes and states to come to an agreement.Seven states have been urged to come up with plans to dramatically reduce the amount of water used by 2 to 4 million acre feet, however, discussions have turned tense. 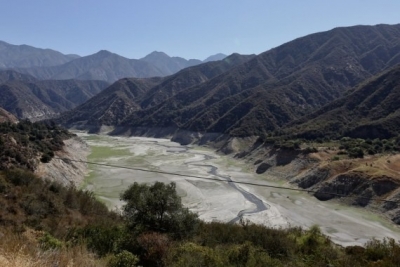 In a press conference on Tuesday, officials from the federal government said that a deal was urgently needed , and that they were also declaring the existence of a tier 2 shortage in the coming year’s water supply according to the dpa news agency.

“In order to prevent the massive collapse of the Colorado River System and the prospect of a future of uncertainty and conflict, the use of water in the Basin must be decreased,” said Tanya Trujillo the assistant secretary of the Interior Department for science and water.

Under the tier 2 shortage conditions the annual water allocation for Arizona will be reduced by 21 percent and Nevada’s by 8 per cent, and Mexico’s by 7 percent.There is no mandatory contribution to water conservation in California however.

“The risks we’ve identified to the system are founded on the most reliable science we’ve ever seen and those risks haven’t changed, so we’re beginning the process and more information will be forthcoming regarding the steps we’ll take in the process.” declared Bureau of Reclamation Commissioner Camille Calimlimlim Touton.

In the absence of an agreement between the states is raising the possibility that the Colorado River crisis – brought by the constant overuse of the River and the West’s dry climate – could escalate into a legal mess.However, Interior Department officials have stated that they are ready to make cuts if needed to ensure the level of reservoirs.

When reporters asked him should the federal government be able to impose the same, Touton said, “I will continue to insist upon the need for partnerships in the basin and the necessity of collaboration and coming to a common solution not just for the this year but also for the future.”

“The Interior Department will continue as Commissioner Touton stated cooperating with state governments in the basin to find a an agreement on a solution” the Deputy Secretary of the Interior Tommy Beaudreau told reporters.

“There’s still time to do this.However, we remain unshaken in our determination to safeguard the system .However dire as the situation may be there are good reasons to be encouraged.The first of all, although there is still work to be completed, the states must joined forces find voluntary solutions.This is a complicated environment,” he added.