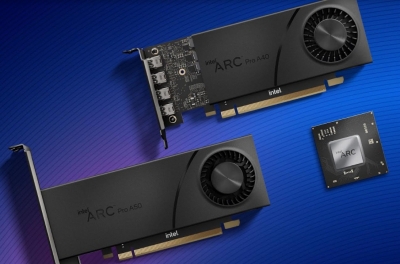 Arc Pro A40 (single slot) and A50 (dual slot) GPUs are suited for desktops with small form factors.

The chips are equipped with built-in ray-tracing hardware as well as machine learning capabilities.

the first-of-its-kind AV1 hardware encoder acceleration the company stated in an announcement late on Monday.

“Intel Arc Pro GPUs will be accessible starting later this year through the top ecosystem partners for desktop and mobile,” it added.

The graphics chips are designed to help you get certifications with the most popular professional software applications for the engineering, architecture, construction, as well as manufacturing and design industries.

“Intel Arc Pro GPUs are designed to work with entertainment and media applications such as Blender and they run the open-source libraries in the Intel oneAPI Rendering Toolkit,” said the company.

The Intel Arc Pro A40 will be available in the single-slot size dimension with 3.5 Teraflops of graphics power 8 ray-tracing cores as well as six gigabytes of GDDR6 memory.

The A50 GPU has a dual slot design, 4.8 teraflops of graphical power with eight ray-tracing ray-tracing processors as well as 6GB of GDDR6 memory, making it better than adequate for workstations.