New Delhi, Aug 7 : Kerala Chief Minister Pinarayi Vijayan on Sunday asked the Centre to confront the Challenges of Cooperative federalism.In his speech at the 7th Governing Council meeting of NITI Aayog, which was presided over by the Prime Minister Narendra Modi, he demanded that legislation on topics in the list of concurrent subjects should only be introduced after a thorough consultation with the states’ governments and that the Central government should refrain from making laws on subjects on the state list. 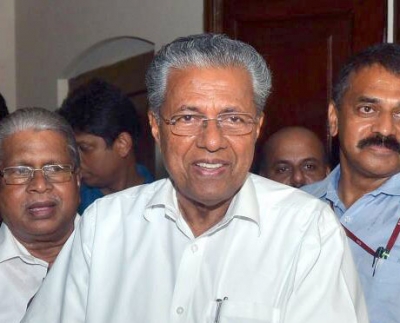 Vijayan also sought urgent actions from the Centre to improve the necessary legal options in the following of the Supreme Court judgment on eco-sensitive zones, as it was needed to ease the sufferings of the marginalized segment of people who live in the affected zones.

He also called the attention of the Council to the issue of GST and demanded the Review of the levy of GST for essential goods, and the continuation of payment to states for a further five years.

The Chief Minister stated that Kerala was in the leading of the decentralisation efforts where every function in the 11th and 12th schedules of the Constitution are delegated to local self-governments and that this significant accomplishment must be taken into consideration in the distribution of the funds consolidated to the state.

He added that the central portion of the assistance provided under PMAY Urban and Rural needs to be revised in light of the rising cost of construction materials.

Vijayan stated that in order to make progress towards a more sustainable transport system and to reduce incidents, the state is seeking support from the central government to speed up the approval of the state’s air and rail traffic plans.

He stated that Kerala has a 590-km coastline and was susceptible to erosion of soil, particularly when it is flooded and, therefore, requires financial and technological assistance.

In announcing that the Centre has cut the quota of Kerosene, or the state in recent times and this has affected fishermen in a devastating way, he sought that the allotment be restored.