San Francisco, Dec 3 : Meta Quest Pro has released a new software update in which it introduces a few features that take advantage of the headset’s new capabilities, including “mixed reality capture”. 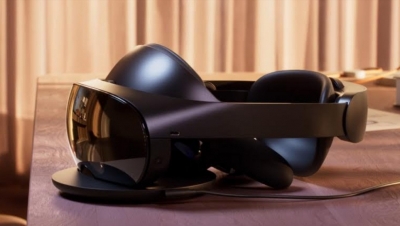 The version 47 update is the first since the launch of Meta Quest Pro last month.

“Meta Quest’s capture tools let you show off the cool moments you have in the headset, and on Meta Quest Pro a lot of the coolest moments involve mixed reality,” Meta said in a blogpost.

With the new update, users can now record and show off those mixed reality moments, while using applications that merge their actual reality with a virtual one.

Previously, users could only capture in-game action and the real-world elements would be reduced to a black background.

Users would need to hit the button in-app to pull up the Quick Action Bar, navigate to Camera, and tap “Record Video” to start capturing, according to the blogpost.

Another feature “Background Audio Playback” comes with the new update, a much-requested feature for all multi-taskers and music lovers.

If a user likes to work with music on, or wants to decompress to a podcast, they will now be able to do so on Meta Quest Pro.

Users can find the feature on the Experimental Features panel in their Settings, said the blogpost.

Horizon Home, the cosy hub users see when they first put on the headset, now makes it easier to change their avatar’s appearance.

Moreover, it also includes a “virtual mirror” to check out users’ avatar’s makeovers in real-time.

Additionally, the Meta Quest mobile app received a few updates.Users can now share their game wish lists with friends and family as a not-so-subtle holiday gift nudge, the blogpost added.