Guwahati 15 August : Assam Chief Minister Himanta Biswa Sarma on Monday declared that the state government would remove 1 lakh “minor cases” including those that arise out of social media postings with the aim of reducing the load on the judiciary system.Sarma who made the announcement in his Independence Day speech, said the state government will submit a petition within the next few days asking the courts to dismiss all instances of mild nature such as offensive comments on Facebook, Twitter etc.The petition is valid until the 14th of August at midnight. 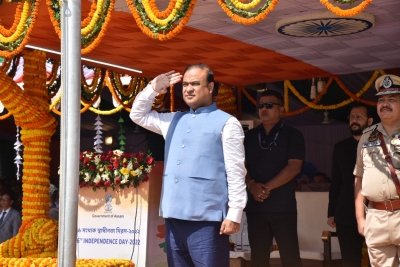 The Chief Minister has stated that this would remove more than 1 lakh cases pending from the system of justice in Assam that will enable the courts to concentrate on clearing 4.5 lakh other cases that are pending in Assam.

Sarma believes that the decision made will speed up the justice system for the cases of significant nature.

The Chief Minister of Assam on Monday said in his speech after raising the tricolour in the College of Veterinary Science playground in Guwahati that universal health coverage will be offered in Assam.

The state government is planning to spend Rs 10,000 crore to improve the infrastructure of 4000 schools in the state, he said.

The people who suffered from the recent flooding in Assam will receive compensation by the 20th of August.

Additionally, to protect the reservoirs of water in the state the government is set to introduce a law, said Sarma.

The Chief Minister has asked the citizens to assume the responsibility of at least one Anganwadi center in their community.

The Chief Minister stated that the government of the state will send around 1,000 young people to visit the cell jail in AnDaman and Nicobar Islands to learn about the courage and sacrifices of the freedom fighters under the British regime.

It will be component of an educational trip.

He also revealed that the self-help groups of the state have sold 42 lakh flags of the nation in the past few weeks for an estimated cost of 17 crore rupees.

Furthermore, Sarma has appealed to all militant groups to drop away their arms and go back to the road of peace.