Itanagar, Nov 30 : Arunachal Pradesh Chief Minister Pema Khandu said that the bordering areas of the state would be developed to facilitate the people to remain in their villages and not migrate while the Centre would invest Rs 50,000 crore to construct highways in far-flung areas along the 1,817 km international borders with China, Myanmar and Bhutan. 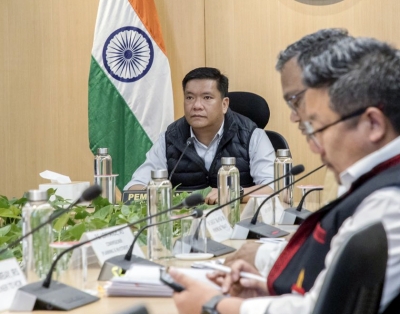 The Chief Minister, who is now on a visit to the remote Kurung Kumey district, which shares border with China, said that very recently, the Union Road, Transport Highways Ministry has sanctioned money for the 1500 kms frontier highway that would connect all the border areas of the state from East to West and interconnecting roads between the highways of about 1,000 kms.

He said that after the completion of these highway projects, all the border districts would be well connected and advised people to plan accordingly as these districts have immense potential in sectors like tourism, horticulture and agriculture.

When informed by the Border Road Organisation officials, stationed in the remote district that improvement in road connectivity in recent years has triggered a reverse migration, Khandu said it was a welcome trend.

Encouraging people to return from their temporary settlements in the urban areas to their own land, Khandu said in the next few years connectivity scenario in the border areas of the state would witness massive improvement.

Emphasising upon the ‘reverse migration’ of the people, he said that people who have left their villages for the urban areas, must return to their land to develop their own areas as it is the need of the hour.

Speaking at a public function in Kurung Kumey district headquarter Koloriang, Khandu said: “Due to lack of roads, livelihood and basic amenities many people of border districts like Kurung Kumey have migrated to places like Itanagar, the state capital.

“However, today the state government with the support of the central government is ushering a new era of infrastructural development, including connectivity while offering livelihood options and basic amenities through several people centric programmes and schemes,” he said.

Referring to several requests received from the local community leaders that sought for construction of accommodation for the government employees posted in the district, Khandu assured that the government was more than willing to provide the facility.

“We will construct government quarters and we will also ensure that the government employees stay in their posting places to serve.But serve whom if the locals are not there?” he asked.

Citing development in terms of connectivity including roads, bridges and digital, Khandu said Kurung Kumey has all the potential to develop into one of the most prosperous districts of the state.

Calling upon the people to change their mindset, Khandu regretted that after so many years of statehood, Koloriang was still rated as the most under-developed district headquarter of the state.

He said the state government is ready to create all requisite infrastructure befitting a district headquarter provided the locals offered land without any controversy.

“The government cannot create infrastructure on air.You give us land, we will give you development,” Khandu assured.

On the portion of the Trans Arunachal Highway that connects Koloriang with rest of the state (Joram-Koloriang Highway) that comes under Package Eight, the chief minister informed that its tender process is over and soon work will start on it.He informed that he has instructed NHIDCL authorities to expedite the construction process and ensure timely completion.

On popular demands, the chief minister assured funds for the construction of a sports stadium, a multipurpose auditorium and a helipad.

Khandu visited the Koloriang Vivekananda Kendra Vidyalaya where he interacted with the students and teachers besides joining in a plantation drive.