Patna 8 Aug : With Nitish Kumar jettisoning the BJP and poised to be Bihar Chief Minister at the helm of the Mahagatbandhan, BJP Rajya Sabha member and ex-Deputy Chief Minister Sushil Kumar Modi on Tuesday dismissed his accusations against his party “lies”. “Nitish Kumar has made serious accusations against BJP in which the latter had a hand in the breaking of his party. 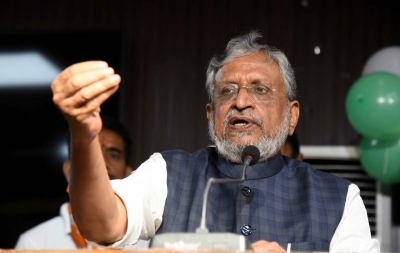 This is a blatant falsehood that Nitish Kumar, along with his party’s national president Lalan Singh are claiming.BJP did not take part in breaking JD-U’s rules,” Modi said in his tweet.

He was also adamant about Nitish Kumar’s claim that the BJP created then JD-U chairman R.C.P.Singh Union Minister with out his consent.

“This is also a liar.It was Nitish Kumar who gave permission to R.C.P.Singh to be minister in the Narendra Modi government,” Modi said, saying that Nitish Kumar was seeking reasons to quit the NDA and, consequently, “he took the help of lies and made False accusations against the BJP”.

According to the claim that Nitish Kumar has a plan to be the Prime Ministerial candidate in 2024 Lok Sabha election and challenge the incumbent Prime Minister Narendra Modi.

The Bihar leader said that “he is not able to contest Narendra Modi.He is not in the capability to take on Modi”.

“For Nitish Kumar, becoming the Prime Minister is a far-off dream.BJP will emerge with an overwhelming majority in the 2024 Lok Sabha election and Narendra Modi will be the Premier for the third time.” Modi said.