Noida, Jan 24 : An ad that was shot on a moving Metro train with commuters on-board took everyone by surprise as the endeavour is not something to which people are generally accustomed to. 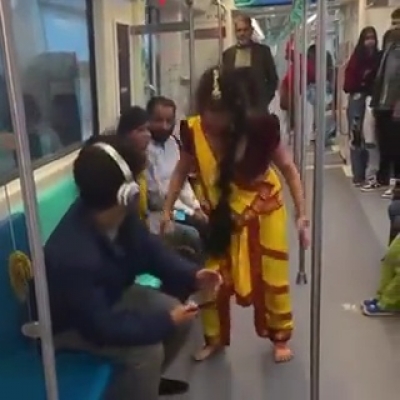 In the videos that have gone viral, a woman is seen dressed as Manjulika — a character from the popular Bollywood movie ‘Bhool Bhulaiyaa’, on board a train, with some of the passengers looking “scared” due to her antics.

Also, a youth can be seen in the video who is wearing a costume similar to that of a robber in the web series ‘Money Heist’.

After the videos surfaced, some questions were raised if the Metro coaches were becoming one of the spots for shooting reels for the social media.

However, an NMRC official told IANS that the ad was shot under the film shooting policy of the corporation.

In the first video, a girl in a Metro coach is seen scaring people in Manjulika’s costume from the movie ‘Bhool Bhulaiyaa’.

A youth who was listening to songs with earphones on got scared by her presence after she pushed him away.

In the second video, a boy is seen in the costume of ‘Money Heist’ on the same metro coach.He was seen holding two bags that were later thrown off.

NMRC media spokesperson Nisha Wadhawan told IANS that a creative agency under the film shooting policy got the shoot done for ‘Shoot Boot’ and ‘Netflix’, adding that many shoots were done earlier as well.