Of late, the audiences are enthusiastic to see new stories and concept-oriented films.Movie buffs love to watch unique movies, rather than routine movies. 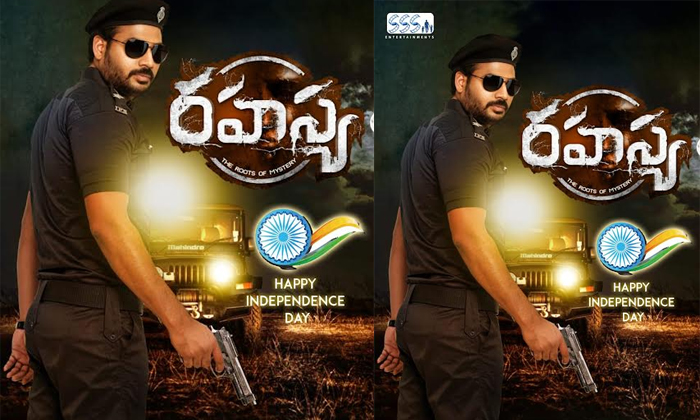 If there is enough content to come and watch in the theatre, the audience are supporting such movies.Under these circumstances, the audiences of the current generation are showing interest in watching mystery thriller movies.

Directors and producers are also making films which will appeal to cine goers and are attaining success.In the same way, now a different concept movie named Rahasya is being made.

A special Poster of this film was released on the occasion of 75th Independence Day.

Nivas Sistu and Sarah Aachar are the lead pair in this film directed by Siva Sri Meegada and produced by Gautami S.Freshly, the character Poster of hero Nivas from the movie has been released.Nivas is playing the role of an NIA officer Vishwa Teja in the movie.

Going by the Poster and his looks, Nivas has played a very Powerful role in the movie.It’s a thriller genre movie with suspense and mystery elements in the narrative.

The shooting of this movie made under the banner of SSS Entertainments has been completed.The promotional activities of this film are going to kick-start soon.Producers are making preparations for the same.This movie is going to be released on a big scale soon.It is known that the first look Poster which has already been released has received a remarkable response.

Music for the film is by Charan Arjun, while background score is by Sunil Kashyap.

G Selva Kumar is working as the cameraman and SB Uddhav is the editor.