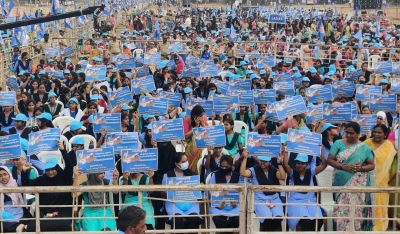 After ‘Visakha Garjana’ last month, the supporters of three capitals organised a massive public meeting addressed by some state ministers and leaders of the ruling party.

Organisers claimed that more than a lakh people attended the public meeting to back the state government’s move for decentralisation of development with three state capitals.

Minister of Finance and Planning, Buggana Rajendranath wanted Leader of Opposition and Telugu Desam Party (TDP) President N.Chandrababu Naidu to clarify whether he was in favour of setting up Andhra Pradesh High Court in Kurnool or not.

The Minister announced that the high court will be built on Jagannath hillock in the city so that it can be visible from a distance of 10 km around the city.

He said the movement to achieve the high court will continue in the interest of the future of youth, farmers and the entire region.

Minister for Energy, Forest and Environment, Ramachandra Reddy said only the YSRCP government can develop Kurnool as the judicial capital.He warned that if Chandrababu Naidu returns to power, he will again try to build Amaravati as the only state capital.

The Minister clarified that Chief Minister Y.S.Jagan Mohan Reddy never opposed development of Amaravati as the capital but he wants it to be one of the three state capitals.

“The proposal is to do justice to all three regions,” he said.

He told the people that the YSRCP government wants to develop Visakhapatnam as the administrative capital, Kurnool as the judicial capital and Amaravati as the legislative capital.

Labour Minister Gummanuru Jayaram urged the Telugu film industry to support the establishment of the high court at Kurnool.

He said the actor and Jana Sena Party leader, Pawan Kalyan should also support the proposal.

The Ministers highlighted that the YSRCP believed that decentralisation is the only solution for the comprehensive development of the state and more importantly to keep the state together.

The government favours decentralisation of the administration by having three capitals.It believes that the three-capital approach will give a boost to the development of the north coastal districts, the coastal stretch from West Godavari to Nellore, and backward Rayalaseema.

There were cultural performances during ‘Simha Garjana’.The participants also released balloons urging the Chief Minister to establish the judicial capital in Kurnool.