Hyderabad, Nov 28 : The U.P.Yoddhas put themselves in a great position to qualify for the playoffs after defeating Bengal Warriors 33-32 at the Gachibowli Indoor Stadium here on Monday.The UP side is currently at the third position with 60 points from 18 matches. 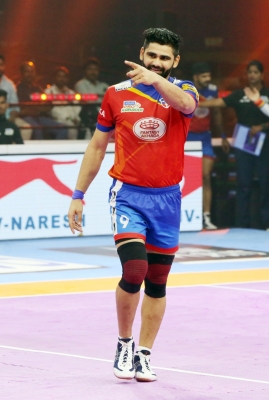 The Yoddhas held a comfortable lead for the most part of the match, but the Warriors fought brilliantly in the last few minutes of the match and almost snatched victory in the end.However, Pardeep Narwal ensured that his team emerges victorious on the night.

The Yoddhas kept raging on and inflicted an ALL OUT in the 15th minute to inch ahead at 13-10.Narwal continued to pick up touch points as the Yoddhas kept forging ahead.

The star raider pulled off a multi-point raid and helped his team attain a stronghold of the match at 19-11 at the stroke of half-time.

The Yoddhas inflicted an ALL OUT in the opening minute of the second half and took a huge lead at 22-11.The UP side tackled Maninder Singh in the 23rd minute as they continued to dominate the proceedings at 24-13.Warriors’ Shrikant Jadhav caught Sumit and Sandeep Narwal, but the Yoddhas still held a comfortable lead at 26-16 in the 27th minute.

Maninder Singh found it difficult to breach the Yoddhas’ defense as the UP side reduced the Warriors to just three members on the mat.However, the Warriors tackled Narwal and managed to stay afloat.

However, Narwal ensured that he scored a bonus point before being caught and ensured that his team stays ahead at 33-31 in the dying seconds of the match.Maninder effected another raid as the Warriors were behind by just one point at 32-33 before the final raid.

But, Tomar treaded carefully and made sure that the Yoddhas walked off the mat as the winners at the end of the game.