Mumbai, Dec 4 : Veteran actor Jeetendra shared memories of his initial years of struggle in the film industry and how his mother, Krishna Kapoor, used to bring food for him on the sets of V.Shantaram’s 1963 movie ‘Sehra’, where he played a small role. 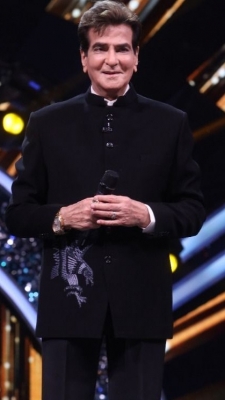 Recalling the days when he used to be a junior artist in ‘Sehra’, Jeetendra said: “Wherever I used to shoot in Girgaon or Lalbaug (in Mumbai), she used to catch a bus and travel all the way to ensure that I ate on time.I prayed to God and asked him to give me something through which I could do something for my mother.”

Jeetendra had given a number of hits including ‘Farz’, ‘Ek Hasina Do Diwane’, ‘Himmatwala’, ‘Humjoli’, ‘Dharti Kahe Pukarke’, ‘Mere Humsafar’, and many more.He was known for his style statement and dancing skills because of which he was given the title ‘Jumping Jack of Bollywood’.

He is coming on the singing reality show, ‘Indian Idol 13’ as a celebrity guest.He was quite impressed with the performance of contestant Vineet Singh from Lucknow on the songs ‘Kitna Pyara Wada Hai’ and ‘Mast Baharon Ka’ originally sung by legendary singer Mohammed Rafi.

While praising Vineet, he says: “I was very close to Rafi ji.He used to sing all my songs.Listening to Vineet reminded me of Rafi ji as his voice is as honest as Rafi ji.”

Vineet also expressed his gratitude towards him: “Sir, our entire family watches your films together.We adore you and want to say that you are handsome.Today, after you hugged me, it was a wholesome moment for both me and my mother.”

Judge Neha Kakkar also shared: “Vineet, you sang as if it is your original composition.Outstanding performance.”

The Top 11 contestants, who will be performing on the show include Rishi Singh from Ayodhya, Bidipta Chakraborty, Anushka Patra, Debosmita Roy, Senjuti Das, Sonakshi Kar from Kolkata, Chirag Kotwal from Jammu, Vineet Singh from Lucknow, Navdeep Wadali from Amritsar, Shivam Singh, and Kavya Limaye from Gujarat.

Jeetendra Remembers How His Mother Brought Food On Sets Of 'Sehra'

Jeetendra Remembers How His Mother Brought Food On Sets Of 'Sehra'