Kolkata, Dec 3 : Speculations were making rounds on November 25 when the Leader of Opposition in the West Bengal assembly Suvendu Adhikari met Chief Minister Mamata Banerjee in Assembly premises along with three other BJP legislators. 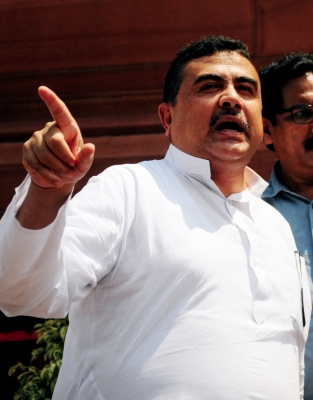 Referring to that meeting, Adhikari on Saturday said a call from the chief minister inviting him was intended at coming to an understanding with him, which he foiled by taking three fellow legislators along with him.

“It was her plan to come to an understanding with me.But I had gauged her intentions in advance.So, I asked three of our fellow legislators to accompany me to the chief minister’s room,” Adhikari said while addressing a public rally at Diamond Harbour — the Lok Sabha constituency of Trinamool Congress national general secretary, Abhishek Banerjee.

Trinamool Congress is yet to respond to the claims made by Adhikari.

To recall, on November 25, after the Question Hour session, the Marshal of the Assembly informed Adhikari that the chief minister intends to have a meeting with him at her room.

However, instead of going alone, Adhikari asked fellow BJP legislators Manoj Tigga, Ashoke Lahiri and Agnimitra Paul to accompany him, which they did.

“Had I met the chief minister alone in her room, it could have led to a lot of political rumours and debates.So, as soon as I was informed that the Chief Minister intended to have a meeting with me, I asked Manoj Tigga, Ashoke Lahiri and Agnimitra Paul to accompany me,” Adhikari said on November 25 after the meeting.

Meanwhile, on Saturday, while addressing the rally at Diamond Harbour, the leader of opposition launched a scathing attack against the state government, saying it is neck deep in corruption.”The development funds coming from the Union government do not reach the common people as they are being looted midway by ruling party leaders,” Adhikari alleged.