Patna 10 Aug, : After the formation of the current Mahahgatbandhan government in Bihar Janata Dal-United’s national President Rajiv Ranjan Singh alias Lalan Singh was critical of the BJP for accusing his party of breaking the coalition pact. “We did not break any alliance pact. 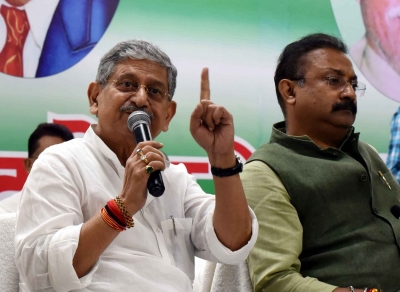 The BJP who Broke the coalition pact and defrauded the JD-U.After 2022’s Arunachal Pradesh Assembly elections We had seven MLAs.

The BJP split six of them and amalgamated the six with the JD-U party.This was a infraction of the coalition agreement, despite the JD-U being in NDA,” he declared.

“During the 2020 Bihar Assembly election, our ground level workers assisted BJP candidates in winning the election.However, the BJP have decided to withdraw their ground-level workers in the areas in which JD-U candidates were running.

In addition the BJP sent a number of candidates to run for election on behalf of the Lok Janshakti Party against JD-U candidates and cut their votes.After LJP candidates were defeated in their election, they were reintroduced back in the BJP.This was a of the violation of the coalition agreement,” he claimed.

“On Tuesday our head of state Nitish Kumar called a meeting in which MLAs have emphasized the ways in which the BJP played an unfavourable role in the 2020 Assembly election.A lot of the JD-U candidates were defeated, while they had the advantage of winning the race in difficult circumstances, MLAs told the Chief Minister.” Lalan Singh added.

“Due to the backstabbing of the BJP and the back-stabbing of the BJP, we lost 43 seats.Following the creation of the government in 2020 the BJP put ‘chutbhaiye Netas’ (small-time leaders) up to make statements in opposition to Nitish Kumar and to humiliate Nitish Kumar and humiliate him.These chutbhaiye Netas used to claim that the BJP is the elder brother while the JD-U is the younger brother in the government.I would like to remind you that in 2005 seats of the JD-U were at 88, and 118 in the year 2010.

The JD-U had only 69 seats in 2015 and when we joined with the BJP in 2017 we were the larger party, as the BJP had only 53 seats.We did not tell them that we were the elder brother and that the BJP is the second partner in the government,” he said.

He pointed out that the National Democratic Alliance (NDA) was founded in the year 1996 “and at the time, was respected Atal Bihari Vajpayee, L.K.Advani, Murli Manohar Joshi and George Fernandes were the leaders.The JD-U was closely associated with NDA for the next 17 years and was not separated for 17 seconds.

“And what’s happening now.BJP is attacking its coalition partners.”

The JD-U chief also stated that in the 2019 Lok Sabha election, the BJP was hoping to win the election and “hence its leaders didn’t do wrong”.

“When it was time for 2020 Assembly elections What they did was to stab us in the back and weaken us” he said.

In a further attack on and pointing out the BJP, he said: “At moment the BJP has 303 seats in Lok Sabha including 16 from West Bengal and 17 from Bihar.I am convinced that the BJP will not get a single seat in West Bengal.

It is the same in Bihar from to date is similar to the two states too.The minimum majority requirement in Lok Sabha is 272 and if we lose 33 seats of these two states and the BJP will be below the majority threshold.Then, we will know the way they (BJP leaders) would rule as an absolute dictatorship in the nation.”

“At the moment there are a lot of issues in the country, such as the rise in prices and unemployment, and the BJP is at fault for this.Three lakh young people who had passed the physical exams of the Army in 2019, but the Centre did not issue appointment letters.They have now created with an Agniveer scheme that will provide young people with an opportunity of four years.

The Leader of the BJP named (Kailash) Vijayvargiya said they will offer positions of security guards in BJP offices to Agniveers following their retirement.Youth are being forced to lose their jobs and live in the streets.” Lalan Singh said.

Concerning the prospect of ED, CBI, and income tax raids he said that they aren’t “frightened”.

“We do not have industrialists.Our main source of revenue is our wages, the rent of our homes, and our farming.They can do whatever they like, we’re not scared of it.”

Lalan Singh also defended RJD leader and the new Vice Chief Minister Tejashwi Yadav.He stated that the chargesheet of the IRCTC scam was filed in 2017, but the trial was not yet underway.”Why why don’t they (BJP) begin the trial?” he asked.

In response to recent statements made of BJP leadership Sushil Kumar MOdi and Ravi Shankar Prasad, he said that the two leaders “are his best friends”.

“Sushil is also a great close friend of Nitish Kumar.

If these two leaders could be allowed to return to the fold after attacking the Chief Minister, we wouldn’t want to.Both leaders are currently not employed in the BJP,” he said.

“I have heard (former JD-U) leader R.C.P.Singh is also claiming that Nitish Kumar has swindled the BJP.In the 2020 Assembly election the BJP employed the Chirag model, and the second time, R.C.P.Singh.Nitish Kumar was a fan of Singh and he was called to the Rajya Sabha twice.He (Nitish Kumar) also resigned from the post of national President and transferred it to (Singh) However, he was acting as an agent of BJP in order to undermine JD-U.Nitish Kumar saw him and exiled him the party.” he added.