New Delhi, Nov 30 : As India’s GDP growth halved to 6.3 per cent in the September quarter of the current fiscal from 13.5 per cent in the June quarter, economists said that the fall is in line with broader expectations, including RBI’s own forecast. 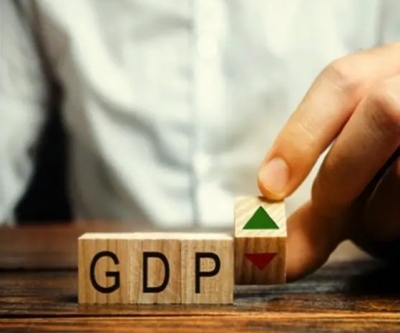 Aditi Nayar, Chief Economist at ICRA, said, “The growth of 6.3 per cent came in similar to our estimate of 6.5 per cent, even as the GVA rise of 5.6 per cent trailed our forecast (6.3 per cent) by a wide margin, led by an unexpected contraction in manufacturing that seems to reflect the impact of high input prices on margins in certain sectors.”

At the same time, GVA growth in agriculture, forestry and fishing has been estimated at above 4 per cent for the third consecutive quarter, which seems somewhat optimistic based on the decidedly mixed first advance estimates of the kharif crop, that were followed by unseasonally heavy rainfall towards the end of the monsoon season, Nayar added.

“Services stood out as the clear driver of growth in Q2 FY2023, accounting for 5.3 per cent of the 5.6 per cent GVA growth in this period, with even the pandemic-scarred trade, hotels, transport, communication sub-segment surpassing its Q2 FY2020 performance,” she explained.

GDP growth was boosted by the performance of private consumption expenditure and gross fixed capital formation, whereas government expenditure displayed a discouraging contraction in Q2 FY2023, on account of the modest de-growth in the Centre’s non-interest revenue expenditure.

Additionally, net imports nearly doubled as compared to the year-ago period, exerting a drag on the GDP growth.Moreover, discrepancies stood at a 10-quarter high in Q2 FY2023, which suggest substantial revisions in the sectoral growth prints may lie ahead.

“With the Q2 FY2023 GDP growth only mildly below our forecast, we are retaining our estimate of the real GDP growth for FY2023 at 7.2 per cent, although a deepening of the external slowdown poses a risk.The month-on-month momentum displayed by several high frequency indicators in October 2022 is healthy despite the early onset of the festive season, although the latter has clearly dampened YoY growth prints on account of a larger number of holidays, as seen in the marginal 0.1 per cent rise in the core sector output in that month,” Nayar said.

Real GVA growth of 5.6 per cent, however, was weaker.Interestingly, services and farm sectors grew faster than expected, while manufacturing contracted unexpectedly in second quarter, Gupta added.

“Today’s data is unlikely to influence RBI monetary policy.Though the consensus is a hike of 35 basis points on December 7, a 50 basis point hike cannot be ruled out.US payroll data on December 2 will be a decider,” Gupta said.

“The growth of 6.3 per cent in India’s GDP for the September quarter is in line with the broader expectations, including the RBI’s own forecast.Similar to the July quarter, the growth continues to be driven by an increase in private consumption expenditure and gross fixed capital formation, indicating an ongoing robust recovery.

“A significant increase in steel consumption and the sale of commercial vehicles also augurs well for coming quarters.The expected increase in private CAPEX in the second half of the year is likely to make the recovery stronger and complete.India continues to do significantly better in reviving its economy and the fiscal year target of achieving a growth of over 7 per cent looks within reach,” said Mohit Ralhan, CEO, TIW Capital Group.

Ritika Chhabra, Economist at Prabhudas Lilladher Pvt Ltd, said, “The GDP grew by 6.3 per cent y-o-y, in line with the expectations.We are observing normalisation in growth rates compared to the previous quarter due to waning covid effect.The private consumption growth remains robust.The growth is expected to remain resilient despite global headwinds on the back of strong domestic demand.”

“Q2 GDP growth expectedly slowed to 6.3 per cent and GVA at 5.6 per cent, led by growth in the services sector while manufacturing was a big drag.Going ahead, even as recovery in domestic economic activity is yet to become broad-based, protracted global drags, shrinking corporate profitability, demand-curbing monetary policies and diminishing global growth prospects weigh on output.

“This will put pressure on domestic growth, which is yet to be broad-based and still lacks the next lever of secular growth.We see downside risks increasing for our 7 per cent growth forecast for FY23,” said Madhavi Arora, Lead Economist, Emkay Global Financial Services, while commenting on the GDP data.