Hyderabad 18th August : Telugu movie ‘Sita Ramam’, which stars Dulquer Salmaan is making news for a variety of reasons.In addition to having an impressive sales at the box-office, the film is also receiving praise from various sources.Former Vice President M.Venkaiah Naidu who watched the film on Wednesday was so awed that he posted on social media to share his thoughts. 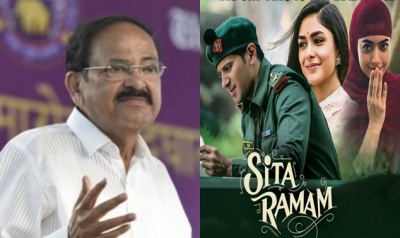 “Watched the film ‘Sita Ramam’.The acting talent of the actors coupled with technical proficiency have resulted in the most beautiful visuals on screen.

In contrast to the usual romantic tales of love, this one features a brave soldier who brings a variety of emotions.A must-see film for all,” Naidu tweeted in Telugu.

Naidu’s apparent delight of the film, recalls the former Vice-Prime Minister L.K.Advani who was well-known for his love of films in his prime.

“It’s after an extended period that I’ve enjoyed the pleasure of watching a decent film thanks to ‘Sitaramam”,” Naidu tweeted in Telugu.

He also praised director Hanu Raghavapudi and producer Aswini Dutt and his Swapna Movie Makers team for making a movie with an uninvolved film that is free of unsettling noises, and packed full of visually pleasing scenes.

“Sita Ramam,” which debuted on August 5 was a huge relief to Tollywood that was wracked by a string of box office failures in recent years.

The romantic film set against the background of war, follows the love story of soldiers as played by Dulquer Salmaan and his love who is performed by Mrunal Thakur.Rashmika Mandanna plays the important part of Afreen.

The story spans between the 1960s and the eighties.