By Vishal GulatiShimla, Oct 1 : With the passing away of six-time Chief Minister Virbhadra Singh, who literally ‘ruled’ the political landscape single-handedly for almost six decades, the somnolent Congress in Himachal Pradesh seems fractured and divided in his absence.No other leader enjoys the mass appeal and popularity that he had. 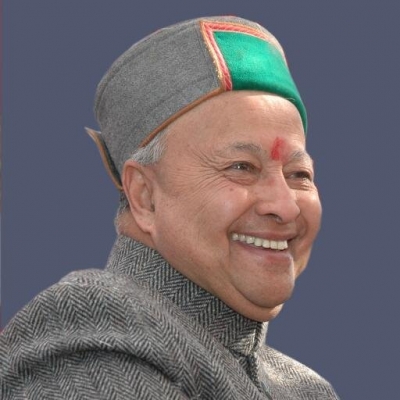 Political observers believe the ruling Bharatiya Janata Party (BJP), which is facing anti-incumbency, has somehow managed an edge over its rival Congress by making it clear that the party will go to the upcoming polls, just weeks away, under the leadership of first-time Chief Minister Jai Ram Thakur.Most probably, the party is likely to retain him for the post, if the BJP comes back to power.

In contrast, the main Opposition Congress, which is confident of clawing back to power and banks largely on a trend to sweep the polls alternatively as both arch rivals ruled the state from 1985, is facing a leadership crisis, resulting in veterans jumping ship to the BJP.

The latest high-profile exit from the Congress party was loyalist and three-time legislator Harsh Mahajan, who for over a decade played a crucial role in strengthening the party’s organisation at the grassroots under Virbhadra Singh.

Mahajan, 66, also close to Congress loyalist-turned-rebel Ghulam Nabi Azad, was president of the state Youth Congress for nine years, the longest serving president so far, and served as a cabinet minister and a parliamentary secretary for 10 years.

Before Mahajan, the other prominent leaders who defected were five-time legislator Ram Lal Thakur, who resigned as vice-president of the party committee citing “displeasure” over its working, and two sitting legislators — Lakhwinder Rana and Pawan Kajal.

Interestingly both Mahajan and Kajal were appointed the state working presidents, along with two others, Rajinder Rana and Vinay Kumar, when the three-term MP Pratibha Singh, the widow of Virbhadra Singh, was appointed the Himachal Pradesh Congress Committee (HPCC) president in April.

“The Congress at the national level stands directionless and lacking in vision, faced with a crisis of leadership, tainted by sycophancy and corruption.This has translated into a diminishing of its numbers, with some of the tallest leaders and stalwarts of the grand old party being compelled to leave its ranks despite years of dedicated service to the organisation,” Mahajan, who played a crucial role in the grooming of Virbhadra Singh’s first-time legislator son Vikramaditya, told IANS.

Interestingly, two working presidents of the HPCC have defected.

The question is: Will a season of shifting loyalties swing elections in the BJP’s favour?

Corruption, unemployment and poor performance of the government will be among the major issues in the forthcoming Assembly elections, said AICC spokesperson Alka Lamba.

She said the BJP government, both at the Centre and the state, has been making false claims.

A confidant Leader of the Opposition, Mukesh Agnihotri, told the Congress workers to forget those who had left the party and move ahead.”The Congress is going to form the next government in the state.”

But senior BJP cabinet minister Suresh Bhardwaj believes the Congress leadership is a divided house, be it at the national level or in the states.

“Rajasthan is the latest example.The Congress is not able to decide a name for the post of national president outside a particular family.G23 leaders are revolting, some of them have quit the party.”

“As far as Himachal is concerned, the Congress state president in an interview has questioned the high command.It’s like every leader is opposing others.People in the state have decided to retain the BJP government and the Congress knows it very well,” Bhardwaj, a legislator from Shimla, told IANS.

Political observers say the BJP under the leadership of Jai Ram Thakur is facing clear cut anti-incumbency.This reflected in its humiliating defeat in the October 2021 by-polls in three Assembly seats and one parliamentary seat of Mandi having 17 Assembly seats in Mandi, Kullu, Lahaul-Spiti, Kinnaur and Chamba districts.

“To overcome the anti-incumbency, the BJP central leadership is focusing to induct seasoned politicians with organisational and ministerial experience from the Congress to give the state leadership a new look to win a consecutive term.For the Congress, the exodus of leaders means dampening the morale to grassroots in the run-up to the polls,” a political observer told IANS.

Mahajan, who was associated with the party from the beginning of his political career and inherited politics from his father late Desh Raj, jumping on the “leave Congress” bandwagon is a setback to the party at a time when the party is struggling to re-establish its credentials in the absence of stalwart Virbhadra Singh, who was known in the political circles to ensure not only the win of his loyalists but also demolish his political adversaries, even those within the party.

According to BJP sources, Mahajan’s induction is part of the party’s strategy to re-establish its presence on seats which have traditionally been weak.

With the poll fever rising every day, political observers say the season of switching loyalties will be peaking.

Political leaders owing allegiance to Mahajan are busy exploring options and looking for greener pastures as the party is failing to project a united face and a mass leader like Virbhadra Singh, who in every poll donned battle gear and declared himself the “self-styled commander” to lead the party.

The Election Commission, which just concluded its three-day visit to the state, is likely to announce the election schedule in the first week of October.

The term of the 68-member Assembly ends on January 7 next year.

As far as campaigning goes, the BJP is far ahead of its arch rival.

While Chief Minister Thakur has been on a whirlwind tour of the state, the Congress is banking on its central leadership as its state senior leaders — Mukesh Agnihotri, Kaul Singh Thakur, Sukhvinder Sukhu, Harsh Vardhan, Sudhir Sharma and Asha Kumari — are concentrating on their respective seats only.

Unlike her husband, who had a direct connect even at the grassroots, state unit chief Pratibha Singh, who has never contested the Assembly poll, is spearheading the campaign by banking on its promise to bring back the Old Pension Scheme (OPS) that will benefit 225,000 employees, a crucial vote bank.

However, the “divided” Congress is struggling to speak with one voice over key issues to put the government in the dock over corruption, deteriorating law and order situation, rising debt, an education scam of selling more than 45,000 fake degrees and the constable recruitment question paper leak that was sold for Rs 6 lakh to Rs 8 lakh.

The only saving grace for the Congress is induction of former BJP chief Khimi Ram, once a close confidante of former Chief Minister and BJP veteran Prem Kumar Dhumal.

He served as a legislator from Banjar assembly constituency twice from 2003 to 2012.

Also the Congress managed to rope in BJP leader Indu Verma, who is the wife of late Rakesh Verma, a three-time legislator.

The family has a base in Shimla district.

But leaders foresee more trouble in the Congress with the granting of tribal status by the Central government to nearly 2.50 lakh voters settled mainly in Sirmaur district, a demand pending for five decades.

The state party leadership fears an exodus of its leaders, comprising two sitting lawmakers — Harsh Vardhan and Vinay Kumar, an HPCC working president, who have been “hobnobbing” with the BJP.

The Hatti community, who got the Scheduled Tribe status this month, is based mainly in the 133 panchayats dotting the trans-Giri area, which is part of the Shimla (reserved) seat.

Despite the growing rumblings, a confident young Congress leader Gokul Butail told IANS that there is no leadership crisis after Virbhadra Singh.

“It is rather an opportunity for the second line leaders to establish themselves.Two former BJP presidents have also joined the Congress recently.

Our MLAs have been threatened and pressured by central investigating agencies.Whatever the BJP may do, there are strong winds of change blowing in Himachal Pradesh,” Butail, AICC joint secretary and in-charge of the election war room, said.

The BJP in the 2019 Lok Sabha elections had won all the four seats that saw 72.25 per cent polling.

(Vishal Gulati can be contacted at [email protected])

With Polls Not Far Away

With Polls Not Far Away, HP Congress Minus Virbhadra On A Slippery Slope