Los Angeles, Dec 4 : Will Smith, who slapped the comedian Chris Rock earlier this year at the 94th Academy Awards, has got a rave review for his latest film ‘Emancipation’ from none other than Rihanna. 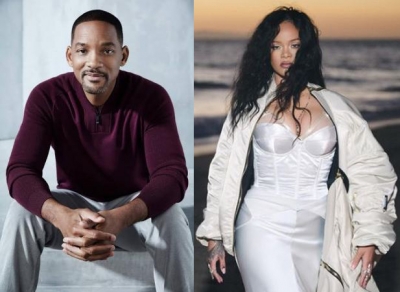 Walking the red carpet for ‘Emancipation’ earlier this week, the actor, 54, shared the music superstar’s reaction to his film after she attended a private screening of it with some of his other star-studded group of friends in October, reports ‘People’ magazine.

“Rihanna loved the cinematography,” Smith told E! News.”She could not get over the look of the film and how it felt.”

‘People’ further states that the ‘Aladdin’ star then added that he also got a pretty good idea of what his friends who attended the screening — including Dave Chappelle, Tyler Perry, A$AP Rocky and Kenya Barris — also thought of the movie.

“The thing that’s great with Black people is they talk to the screen the whole time, so you don’t have to ask people’s opinion,” he joked to the outlet.”So, I didn’t have to ask anybody’s opinion from the room.”

Smith shared photos of the screening on Instagram in late October, including a group shot of the A-listers after the movie.He captioned the photo, “EPIC night!! Thanx for coming to see #Emancipation.Hope ya’ll enjoyed.”

In the post’s comments section, Barris also praised the film saying, “This night was MAGIC and your movie is truly something that will last forever!”

Set during the American Civil War, ‘Emancipation’ follows a man named Peter, played by Smith, who escapes slavery and sets out on a quest for freedom from plantation owners that nearly killed him.