By Mahua VenkateshThe successful completion of a trial run for trans-shipment of cargo movement from Kolkata to the northeast through Mongla port in Bangladesh marks a new era in connectivity for New Delhi and Dhaka.This would mean that goods from Kolkata can reach the land-locked northeastern states through Bangladesh. 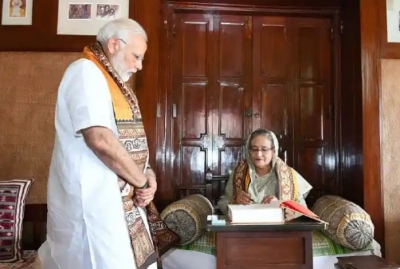 The movement of goods from Kolkata port to the northeastern states using the India-Bangladesh Protocol route will reduce both transit cost and time.

However, issues relating to ease of movement which include customs and immigration clearances need to be resolved at the earliest, sources said adding that a large chunk of goods is now being transported through rail and air routes.

A detailed study of the trial run will be done to identify the problems.

The distance between Kolkata and Agartala by road is treacherous.

The 1650 kilometre route is through Guwahati but through the waterways, it is only 620 km.

Issues including increasing connectivity, boosting economic cooperation, and the inking of free Trade agreement between the two countries will be the focus of discussion between Prime Minister Narendra Modi and his Bangladesh counterpart Sheikh Hasina’s during the latter’s visit to New Delhi next month.”The importance of boosting connectivity has come to the fore amid the changing global geopolitical dynamics and economic slowdown, this is one area which needs urgent attention,” a person with business interest in Bangladesh told India Narrative.

Modi during his visit to Bangladesh last year described the South Asian nation as India’s “soho jatri” or co-traveller.

Modi and Hasina have repeatedly underlined the need to enhance connectivity, including people to people contact and economic cooperation between the two neighbours that share a 4,096-km long border – the fifth longest in the world.

The interborder trans-shipment exercise is a result of a bilateral agreement signed between the two neighbours in 2018 agreeing to facilitate transhipment and use of Mongla and Chittagong ports.

“This is very encouraging development showing that we are on track as far as connectivity is concerned,” Ishfaq Ilahi Choudhury, Bangladesh war veteran and a commentator of South Asia told India Narrative.

Access to Chittagong and Mongla ports has been a phenomenal step as it will not only help the region to be relieved of its land-locked status of the northeast but it will also add an alternative connectivity route, an Observer Research Foundation report said, adding that the move will boost Trade as the usage of these Bangladeshi ports will reduce time and distance substantially, making its more viable.

The recent opening of the Padma Multipurpose Bridge or simply the Padma Bridge, which is the longest bridge on the Padma river will also boost Trade and commerce for the country and provide further thrust to the Mongla Port – the second largest seaport in Bangladesh.The bridge connects India directly to Dhaka by road, rail, and ports.

Cecile Fruman, World Bank Director for Regional Integration and Engagement in the South Asia Region (SAR) told India Narrative that for seamless connectivity, the countries need integrated multimodal transport systems, which include roads, rails, inland waterways, along with well-designed land, river, and seaports.”It is also important that these multimodal corridors are connected to local and rural markets and logistics, so that the wider benefits trickle down to local communities and businesses,” she said.

In this complex sub-regional geopolitics, India and Bangladesh provide a unique model of “good-neighbourly” relationship, anchored in the vision of peaceful co-existence and sharing a prosperous neighbourhood by growing together hand-in-hand, the ORF study pointed out.