By Quaid NajmiMumbai, Aug 15 : The hotbed of Indian Freedom, as the erstwhile Bombay Province and the modern-day Maharashtra was known, boasts of a large number of historical sites, places or monuments linked with the country’s Independence movement against the British Raj. 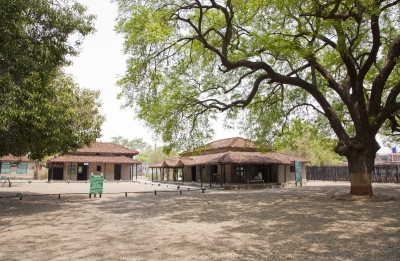 The tourists get little known insights from the tours – for instance, the 3 different circuits – Mani Bhavan (Mumbai), Aga Khan Palace (Pune) and Gandhi Sevagram Ashram (Nagpur) have a common thread – Mahatma Gandhi made it his abode at some or the other time during the long fight for independence.

Mani Bhavan is a quaint 2-storied building on a shaded road in south Mumbai close to the Grant Road station and was the hub of Gandhiji’s political activities for 17 years from 1917-1934, and now houses a Gandhi Memorial-cum-museum.

“It is amazing to learn how Gandhiji launched so many agitations – the Non-Cooperation, Satyagraha, Swadeshi, Khadi and Khilafat movements and his association with the ‘Charkha’, and more, from this little place,” remarked an awed Ruma M.Bose from Palghar who toured the Mumbai Circuit recently.

The Aga Khan Palace was where Gandhiji, his wife Kasturba and his secretary Mahadev Desai, were jailed for nearly two years from August 9, 1942-May 6, 1944.

“The place also reflects the sorrow of Gandhiji who lost both Kasturba and Desai during that period and their ‘samadhis’ are built here, and many other facets that we never knew.This is a truly great initiative of the Maharashtra Government,” said Firdaus Irani, a professional bike-racer after going on the Pune circuit.

The Gandhi Sevagram Ashram in Wardha was Gandhiji’s home for a significant period from 1936 till his martyrdom in 1948, and was his rural headquarters where he was invited to set up the humble abode by the industrialist Jamnalal Bajaj in 1934.

“It was my first visit to this place, I viewed the simple life here signifying service to all… it transports us into a different era,” said Abraham Oomman, Director of KosherLife, a wellness products group in Mumbai.

Borikar said that this is the first initiative of Maharashtra for which the government has appointed professional tour managers to take the tourists around on these circuits as per their requirements.

“All know how Maharashtra played a vital role in the Independence Movement.we want the people, especially the new generation to visit these historically significant places, learn about the huge sacrifices made by our great Freedom fighters, the heroism of the brave revolutionaries and other aspects,” said Borikar.

Another DoT official said that the government is promoting the ‘Landmarks of Freedom Movement’ circuits through local civic authorities, travel and tours operators, social media and other avenues to attract more visitors particularly as the country completed 75 years of Independence in 2022.

Mumbai Circuit covers the Bombay Harbour which was the trigger point for the weeklong Royal Indian Navy Mutiny (Feb.1946) that virtually sounded the final nail in the coffin of the British Raj, the Bombay High Court where LokManya Bal Gangadhar Tilak was in the dock in 1908, 1909 and 1916 fighting different cases against the foreign rulers.

In Pune Circuit, Tilak’s abode, the Kesari Wada, from where he launched the fiery newspaper ‘Kesari’ (Jan.1881), Mahatma Jyotiba Phule’s home Phule Wada and Yerawada Central Jail are the highlights.

Incidentally, the Yerawada Central Jail, sprawling over 512 acres, probably boasts of the highest number of VVIP inmates in its history, like Gandhiji, Motilal Nehru, Pandit Jawaharlal Nehru, Sardar Vallabhbhai Patel, Netaji Subhash Chandra Bose, Sarojini Naidu, Joachim Alva, Veer Savarkar and many more, who were behind the bars here at some or other time.

The sprawling Nagpur Circuit spawns districts of Nagpur, Chandrapur and Wardha, with the major attractions being the Gandhi Sevagram Ashram, Acharya Vinoba Bhave’s Paunar Ashram and his Bhoodan Movement, and the Sitabuldi Fort – where the Appasaheb Bhonsle’s army fought with the British in Nov.1817 – 40 years before the First War of Independence erupted in Meerut in May 1857.

DoT officials explained that along with the suggested itinerary, the tour operators are free to include other similar attractions depending on the duration and demands of the tourists in different cities.

Like hundreds of others – the trio of Ruma M.Bose, Irani and Oomman – said they were ‘thrilled and filled with patriotism’ after going on these tours, and returned with a trove of nationalistic tales to regale their families and young kids at home, ahead of Azadi Ka Amrit Mahotsav.!

(Quaid Najmi can be contacted at: [email protected])