Sydney, Jan 8 : Veteran left-handed opener Usman Khawaja, who was named Player of the Match for his 195 not out in the drawn Sydney Test against South Africa, said its very important to put the team first in the game. 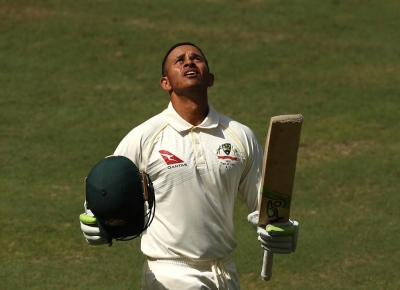 Khawaja’s comments come after Australia captain Pat Cummins declared the first-innings score on 475/4, leaving Khawaja stranded at 195, five runs short of what would have been his first double century in Test cricket.

The move brought comparisons with the Sachin Tendulkar-Rahul Dravid incident in 2004 Multan Test, when the then-skipper Dravid had declared, leaving Tendulkar stranded on 194, and fell six runs short of a famous double century on Pakistani soil.

“I think any children watching out there, or anyone watching how Australia plays their sport, it’s always team first and I think that’s very important when you are playing a team game,” said Khawaja in the post-match presentation ceremony.

The knock also ensured that Khawaja’s run-making spree at Sydney continued after notching up twin centuries in last year’s Ashes Test.”I’m just enjoying the good times at the moment.(The SCG) can be a grinding wicket, a slow wicket, spin is always in the game so you need to have your options against spin.It’s not rocket science, if you bat well and you do it for a long time you’ll usually succeed out there.”

His opening partner David Warner, named Player of the Series in 2-0 series victory over South Africa for his 213 runs in three matches, wished for the Sydney weather to be better for next year whenever the SCG, his home ground, hosts a Test match.

“It was a fantastic performance by the whole team.Each individual had their own performances.We would have all liked to bat a bit more.But credit to our bowlers.Our bowlers were fantastic.It didn’t go our way.Hopefully this Sydney weather is better next year.”

Very Important To Put Team First When You Are Playing A Team Game: Usman Khawaja

Very Important To Put Team First When You Are Playing A Team Game: Usman Khawaja