Bhopal 15 August : The Madhya Pradesh government will build an ‘VeerBharat Memorial’ that will comprise of the monuments of freedom fighters and revolutionaries Chief Minister Shivraj Singh Chouhan said after raising the tricolour on Monday.In his address to a crowd to mark the anniversary of the 75th Independence Day at the Motilal Nehru stadium in Bhopal, Chouhan said freedom fighters have given their lives for the end of the oppressive British rule. 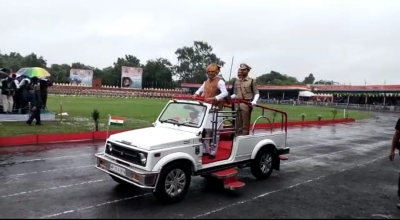 He added that “now is the time to cherish this country and transform it into a progressive one”.

“A Memorial that is to be named “Veer Bharat” will be erected in Bhopal and will be adorned with statues of freedom fighters who gave their lives for the nation’s Independence.

Visitors to the Memorial will be able to learn about a specific freedom fighter and revolutionary in details,” Chouhan said.

The celebration of “Azadi Mahotsav was held in the midst of heavy rain throughout Madhya Pradesh.

Tricolours were paraded across the state in the morning on Monday.Chief Minister Shivraj Singh Chouhan was also present to hoist the Tricolour in Bhopal during heavy rain.

Chouhan stated that Madhya Pradesh has achieved several milestones in the past couple of decades , and this could occur due to various initiatives initiated by the state government.

In addition, the Chief Minister announced that the issue of leakage of water from Karam Dam, which has been a major issue for the past few days is now resolved and the water levels have been reduced to an alternative route.

He declared that the officers, policemen as well as soldiers who worked night and day to ensure the security of the people will be awarded by the government of the state.

Notably, the ongoing seepage of water out of Karam Dam in Dhar district has forced the administration to relocate more than 6000 families of two adjoining districts– Dhar and Khargone -to camps for relief.

In a bid to prevent the situation from becoming dangerous and threatening, the Army was asked to offer assistance.