Chennai 19th, August : The Justice Aruna Jagadeesan (retd) Commission that investigated the police firing of the 22nd and 23rd of May, 2018,, against protestors in the Tamil Nadu city of Thoothukudi which led to the deaths of 13 people and a total of 13 deaths, has come out strongly against the police officers involved and the district Collector at the time, N.Venkitesan.The report, which was submitted to the state government on the 18th of May, has yet to be debated in the Assembly.According to the report seen by the IANS The Commission has deemed the police firing as “totally random and without cause” and in its harsh criticism on Venkitesan and said that he “had made ill-informed decisions”. 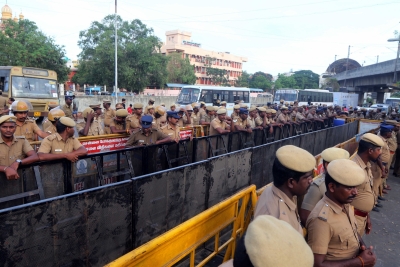 The report also noted that police fired at protesters fleeing and that there was no proof with the police to suggest the protesters had been militant.

Noting that the police had taken shelter in a safe area and used sharpshooters with long ranges to shoot at protesters The Commission, in its report has recommended that action be taken against 17 officials, including then IGP, South Zone, Shailesh Kumar Yadav.

The commission in its report slammed officers who were not distributing prohibitory orders in accordance with Section of 144 of the CrPC.It stated that despite the promulgation of prohibitory orders in respect of two limits of police stations the officers were unable to stop the demonstration against Sterlite on the SAV school premises in Thoothukudi.

This has resulted in confusion and the police being unable to stop the crowd from becoming violent.

The report did state that there had been no intelligence failings however, the administration of the district did not attach much importance to the report on intelligence.

In the beginning four individuals died in police firing , and the mob became violent and began destroying public property, resulting in more shooting.In the final analysis, 13 people died in the firing of police.

Human Rights organization, People’s Watch welcomed the report of the Commission and the Executive Director Henri Tiphange called upon the government to call an extra session of the Assembly to publish the report.

He declared that action against those who were involved in the firing of police officers was one of the most important election plans of the DMK and added that the government had an obligation in making the report available to the house, as it’s been three months since it was presented to it.