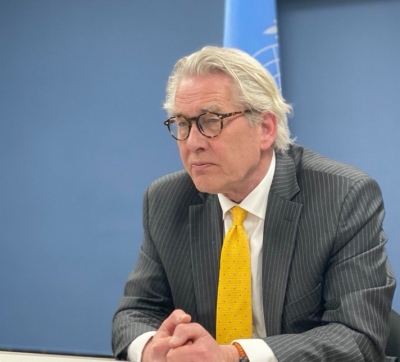 “The absence of a meaningful peace process to end the Israeli occupation and resolve the conflict is fueling a dangerous deterioration across the OPT (occupied Palestinian territory), particularly in the West Bank, and driving the perception that the conflict is unresolvable,” he told the Security Council.

Israelis and Palestinians must determine how they envision the future.Negotiations can no longer be pushed off indefinitely, he was quoted as saying by Xinhua news agency.”The current course is leading us toward a perpetual state of violence and conflict.Meaningful initiatives are needed to turn the current trajectory around and they are needed quickly.”

Ending the occupation and realizing a two-state solution must drive collective international efforts, he added.

“I remain deeply troubled by continued Israeli settlement expansion in the occupied West Bank, including East Jerusalem, and attempts by some Israelis to further expand the settlement footprint through the establishment of outposts which are illegal also under Israeli law,” he told the Security Council.

Demolitions and seizures of Palestinian-owned property remain a serious concern, he said.

“I am deeply concerned by the tragic civilian deaths and injuries, including of children, caused by the latest escalation in Gaza.Israel must abide by its obligations under international humanitarian law, including the proportional use of force, and take all feasible precautionary measures to spare civilians and civilian objects during military operations,” he said.

“Further, I condemn the indiscriminate launching of rockets by Palestinian armed groups from highly populated neighborhoods in Gaza into civilian population centers in Israel, which also resulted in casualties and violates international humanitarian law and puts the lives of civilians at risk.”

Wennesland also expressed grave concern over the deteriorating security situation in the occupied West Bank, including the increase in attacks and armed exchanges between Israelis and Palestinians.

The absence of intra-Palestinian unity continues to undermine Palestinian national aspirations and prevent a common Palestinian approach toward resolving the conflict and addressing the needs of the population, he said.”I call upon all Palestinian factions to redouble efforts to reunite Gaza and the occupied West Bank, under a single, democratic, national government.Gaza is, and must remain, an integral part of a future Palestinian state as part of a two-state solution.It is also crucial that Palestinians hold elections — not only a key step toward Palestinian unity, but also as a means to renew the legitimacy of national institutions.”

The current negative trajectory puts at great risk the socio-economic and institution-building that has prepared the Palestinian Authority for statehood.There must be a bridge between these immediate challenges and the longer-term objective of achieving the vision of two states, he said.