By Ateet SharmaNew Delhi, Aug 17: United Nations Secretary General Antonio Guterres will be in the western Ukrainian city of Lviv on Thursday to attend a trilateral meeting with Volodymyr Zelinskyy and Turkey’s President Recep Tayyip Erdogan, a development which will be followed closely by neighbouring Russia. 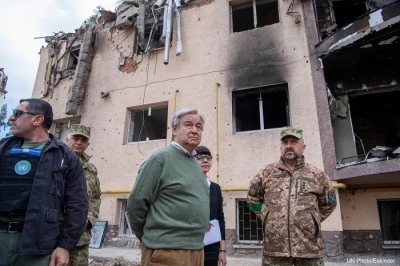 Guterres’ visit to the war-torn country comes a little over two weeks after the first cargo ship left the Ukrainian Black Sea port of Odesa carrying Grain under the Black Sea Grain Initiative.

Stephane Dujarric, the spokesman for the UN Secretary-General, said in New York last night that Guterres is going to Ukraine at the invitation of Zelinskyy.

From Lviv, he will be travelling to Odesa on Friday which is one of the three key Ukrainian ports in the Black Sea – including Chernomorsk and Yuzhny – for exporting Grain under the initiative signed by Ukraine, Russia and Turkey in Istanbul on July 22.

On Saturday, Guterres will meet the senior representatives from Ukraine, Russia, Turkey and United Nations at the Joint Coordination Centre (JCC) set up in Istanbul for safe transportation by merchant ships of Grain and other foodstuffs and fertilisers from the Ukrainian ports.

According to the UN, the shipment of 23,000 metric tonnes of wheat will go to WFP’s humanitarian response in the Horn of Africa, where the threat of famine stalks the drought-hit region.

Guterres is also expected to hold discussions on the volatile situation at the Russian-controlled Zaporizhzhya Nuclear Power Plant (ZNPP) and the impending visit of the International Atomic Energy Agency (IAEA) experts to the biggest Nuclear power plant in Europe.

“On the power plant, I mean, I… there’s been no change, though, in our position stated yesterday that it is… that we are there to support the International Atomic Energy Agency’s implementation of its mandate, and we’re ready to support it logistically and security-wise from Kyiv,” the spokesperson added.

Interestingly, much before his trip’s details were made public in New York, the UN Secretary General held phone talks with Russian Defence Minister Sergei Shoigu on Monday.

“On August 15, the Minister of Defence of the Russian Federation, General of the Army Sergei Shoigu, held telephone conversations with UN Secretary General Antonio Guterres to discuss the conditions for the safe operation of the Zaporozhye Nuclear power plant,” the Russian Defence Ministry said in a statement.

As reported by IndiaNarrative.com earlier, Moscow is also not happy with the Grain deal as the package of documents signed in Istanbul included agreements not only on the export of Grain from three Ukrainian ports but also on the promotion of Russian food products and fertilisers to world markets.

“We hope that all package agreements will be implemented in full and Western countries will create the necessary conditions for access to world markets for Russian fertilisers and foodstuffs,” Ivan Nechaev, the Deputy Director of Russian Foreign Ministry’s Information and Press Department, had said in Moscow last week.