Muscat (Oman), Oct 2 : Singapore and Hong Kong-registered convincing victories over Thailand and Qatar respectively to assure themselves of a spot in the semifinals of the ICC U19 Men’s Cricket World Cup Division 2 Asia Qualifier at the Oman Cricket Academy (OCA) grounds, here on Sunday. 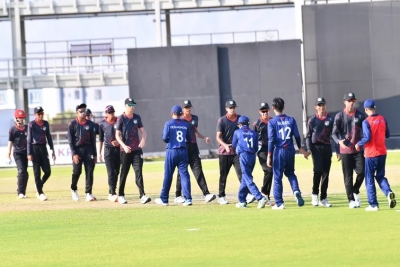 In the Group B action, Hong Kong wrapped up the proceedings early in the day against Qatar as they raced to an eight-wicket victory while Singapore posted an emphatic 167-run win over Thailand.

At the OCA 1 ground, Singapore elected to bat first and the batters made merry as they scored 248/6 in 50 overs.Last match centurion, Sidhant Srikanth continued his rich vein of form as he hammered an unbeaten 72 off 80 balls.

His inning was studded with five boundaries and a maximum.

Vihaan Maheshwari was the other half-centurion with a solid 52 off 79 balls.

Chasing a tough target, except for Thailand skipper Chaloemwong Chatphaisan, none of the other batters could stay at the crease.Except for Chatphaisan’s 51, none could reach double digits as they were bowled out for 81 in 33.4 overs.

Singapore captain Jeevan Santhanam was the pick of the bowlers with 4/25.Equally impressive was Adwitya Bhargava, who claimed 3/6 in 4.4 overs.

Hong Kong’s Darsh Vora ran through the Qatar top-order to leave them reeling at four for three in just 4.2 overs.The early collapse never allowed Qatar to bounce back as they were bowled out for 123 in 40.1 overs.

Tailender Luqman Mehmood top-scored with 24 to help his team cross the 100-mark.Captain Jack Joseph made 22 and was one of the three victims of Aarush Garg, who took 3/18.

Hong Kong were never in trouble in reaching the target as they chased it down in 27 overs for the loss of two wickets — the openers — who fell to Aryan Surani in the same over.

Parth Bhagwat and Ansh Doshi then shared a 101-run third-wicket partnership to lead the team to victory as they scored 127/2.

Doshi was unbeaten on 39 off 51 deliveries while Bhagwat’s knock of 61 was laced with ten boundaries.