Bengaluru, Sep 21 : In a fire that broke out in an apartment in Bengaluru in Karnataka on Tuesday two women were burnt to death and five others suffered serious burn injuries.Three apartments were totally gutted. 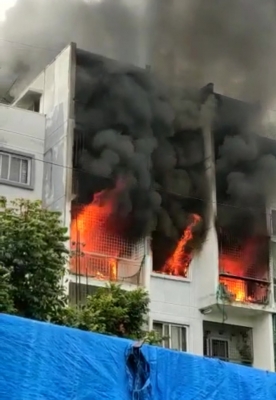 Fire brigade personnel are continuing search operations in the apartment and the exact number of casualties, injuries and damage to property will be known only once the search operation is over.

The incident took place in the Ashrith Aspire Apartment of Devarachikkanahalli near Bommanahalli in Bengaluru.

The deceased were identified as Bhagyarekha (59) and her mother Lakshmidevi (82).The bodies have been shifted to the mortuary.

A LPG cylinder blast is suspected to be the reason for the tragedy.

Amar Kumar Pande, ADGP Fire Force who visited the spot, said that the rescue operation is being hampered as there is still thick smoke engulfing the apartment.

The fire brigade and emergency services personnel have managed to contain the fire from spreading.The preliminary investigations suggest that the fire broke out after the LPG cylinder blast but it is yet to be confirmed.

The incident was reported around 4.30 p.m.The fire tenders immediately rushed to the spot and additional fire tenders were also sent from other fire brigade stations.Sixteen officers from the fire brigade and emergency services were pressed into operation.As of now reports say that two persons died in the tragedy and a search operation is still on, he said.

He added that an aerial platform ladder, which is used in difficult situations, has been pressed into service.The evening traffic congestion slowed them down a bit in reaching the site, he stated.

Eyewitnesses said they saw the fire engulfing the apartment and they saw an old woman in the balcony burnt to death before the fire tenders reached the spot.

Satish Reddy, BJP MLA, stated that he had informed Chief Minister Basavaraj Bommai about the incident and he is also reaching the spot.

The police have said that the incident took place because of a cylinder blast.This is a tragedy, this should not have happened, he said.