Hyderabad, Dec 1 : A key meeting was held at Delhi residence of BJP General Secretary B.L.Santhosh in October to hatch the conspiracy to lure the TRS MLAs, reveals the evidence submitted by the Special Investigation Team (SIT) to the Telangana High Court. 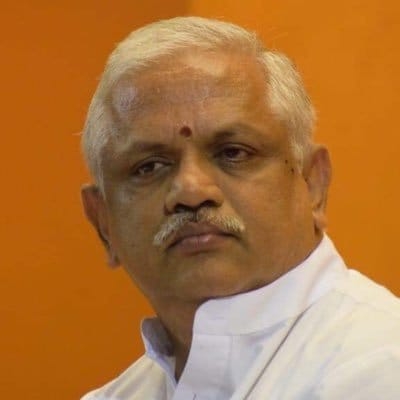 The SIT, in its report to the court, claimed that Santhosh played a key role in the conspiracy to poach on the MLAs of the ruling Telangana Rashtra Samithi (TRS).

A meeting was held at Santhosh’s house in the national capital on October 15 to carry out the operation in Telangana.

The SIT has added Santhosh, NDA convenor in Kerala Tushar Vellapally, Kerala doctor Jaggu Swamy and advocate B.Srinivas as the accused in the sensational case.

Ramachandra Bharati, Nand Kumara and D.P.S.K.V.Simhayaji were arrested by the Cyberabad police from a farmhouse at Moinabad near Hyderabad on the night of October 26 when they were allegedly trying to lure four MLAs of TRS with offers of huge money.

Cyberabad police conducted the raid on a tip-off by Pilot Rohit Reddy, one of the MLAs.He alleged that the accused offered Rs 100 crore to him and Rs 50 crore each to three others.

The SIT submitted to the court documents, CDs, pen drives related to exchange of WhatsApp messages between accused as evidence to establish their involvement.It has also submitted mobile phone locations of the accused and confessions of those questioned by SIT.

The evidence submitted by the SIT included transcripts of WhatsApp messages between the first accused Ramachandra Bharati and Santosh.The two had a chat on April 26, 2022 about the operation in Telangana.

The SIT also submitted details of the WhatsApp messages between the two on September 26.

The court was submitted evidence of Simhayaji holding a meeting at Sky High Hotel in Hyderabad.He even tried to lure leaders of other parties, including Congress leader and former deputy Chief Minister Damodar Rajanarasimha and Telangana Jana Samithi (TJS) leader M.Kodandaram.

Meanwhile, SIT headed by Hyderabad Police Commissioner C.V.Anand has clarified that the SIT was not responsible or involved in any way in leakage of this information about the evidence submitted to the court to the media.

Anand said evidence was submitted against each accused and the copies of the same were furnished to lawyers representing the petitioners.

Lawyers representing the accused had found fault with the manner in which SIT was conducting the probe.They had questioned the leakage of information to the media.

Senior counsel Mahesh Jethmalani, who was representing the accused, objected to Chief Minister K.Chandrasekhar Rao making investigation details public and sending it to the judges of High Court and Supreme Court.He accused the Chief Minister of political motives.

However, senior counsel Dushyant Dave defended the actions of the chief minister.

He argued that a state government has every right to defend itself against attempts to topple it through illegal means.