New Delhi/Agartala, Dec 5 : Hundreds of tribals from Tripura, including a large number of women, on Monday began their two-day sit-in demonstrations at Jantar Mantar in the national capital to intensify their demand for greater autonomy for the tribals with Constitutional recognition. 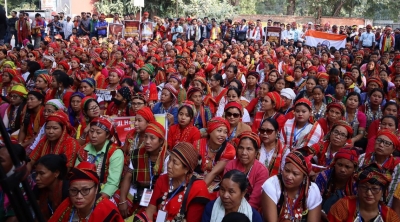 Tripura’s influential tribal-based party — Tipraha Indigenous Progressive Regional Alliance (TIPRA), which spearheading the agitations for ‘Greater Tipraland’ since last year to achieve more autonomy and political power for the tribals, organised the sit-in demonstrations in the national capital to draw attention of the Central government and national leaders.

After organising various agitations and numerous events in BJP ruled Tripura, several hundred leaders and workers of TIPRA led by party supremo and former royal scion Pradyot Bikram Manikya Deb Barman went to Delhi to hold the stir on December 5-6 to press its demand for more autonomy for the all round development of tribals, who constitute one-third of Tripura’s four million population.

Deb Barman told IANS: “We are not against any community.We want justice and more power for the backward and poor tribals.We had organised a similar two-day sit-in in Delhi in November last year.Like previous occasions, this time too, we would submit a memorandum to Union Home Minister Amit Shah to accept our ‘Greater Tipraland’ demand.”

He said that they would send a memorandum to the Union Home Minister Amit Shah justifying their demand.

He said TIPRA would continue to organise various programmes and peaceful agitations in support of its demand.

TIPRA, locally known as Tipra Motha, has been governing the politically important Tripura Tribal Areas Autonomous District Council (TTAADC) since last year and they wrested the power of the autonomous body in April last year defeating the BJP, CPI-M and the Congress.

In a Facebook post, Deb Barman said: “Thousands of indigenous Tiprasas from all parts of the state (and country) organising the demonstration in Delhi to compel the decision-makers in the power corridors of the national capital to listen to our lawful and constitutional demand.Let’s show the true spirit and power of Thansa.”

Months ahead of the Assembly polls in Tripura, TIPRA held a mega rally in Agartala on November 12.

Winning of the 30-member TTAADC by the TIPRA was of great significance as the body has jurisdiction over two-third of Tripura’s 10,491 sq.km.area and is home to over 12,16,000 people, of which around 84 per cent are tribals, making the autonomous council as a mini-assembly in Tripura after the 60-member Tripura Assembly.

The TTAADC, constituted in 1985 under the sixth schedule of the constitution has legislative and executive powers and covers nearly 20 of the 60 assembly constituencies in Tripura.

Political pundits predict that TIPRA would play a crucial role in the Assembly elections in Tripura, expected to be held in February next year.