By Sujit ChakrabortyAgartala, Sep 27 : The Tripura and Meghalaya governments have urged both India and Bangladesh to reopen the “Border Haats” (markets) to promote the local business and livelihood of the people living on either side of the border. 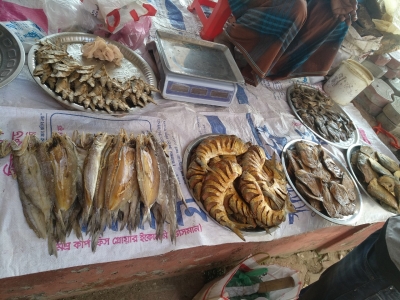 The four “Border Haats”, two each in Tripura and Meghalaya, have remained closed since March 2020 after the outbreak of the Covid-19 pandemic and the consequent lockdown, causing “immense loss” to the people living in the bordering villages.

Officials of the Tripura Industries and Commerce Department said that the district administration officials of the state’s Sepahijala and South Tripura districts have on a number of occasions approached their Bangladesh counterparts to reopen the “Border Haats” as the Covid-19 induced situation has been largely tamed.

“Bangladesh district officials said that the concerned government ministries in Dhaka were yet to allow them to reopen the markets,” officials told IANS.

Jaipur-based think tank CUTS International, which has done several studies on the border trade, had also recommended to the Indian government to resume these border markets maintaining necessary precautions against Covid-19, including social distancing as these markets boost the economy, cement ties between the people of the two countries and also check illegal trade.

CUTS International Executive Director Bipul Chatterjee said that reopening of the “Border Haat” would help local stakeholders on both sides of the border to regain their livelihood and can act as a significant contributor to the post-Covid recovery of the local economy in these border areas.

Citing the local haat management committee’s records, Chatterjee told IANS that just before the onset of the Covid-19 pandemic, the combined annual trade value of Balat and Kalaichar “Border Haats” was nearly Rs 546 million and that in Kamalasagar (Sepahijala district) and Srinagar (South Tripura district) the trade in “Border Haats” in Tripura was Rs 148 million per year.

“That’s huge for these local economies and they have significant multiplier effects as that money is usually circulated among the local communities,” he pointed out.

Over the last decade, 10 “Border Haats” were established or approved along the India-Bangladesh border at Tripura and Meghalaya.Out of them, six are in Meghalaya, and four in Tripura.

According to CUTS International, before the lockdown, two “Border Haats” in Meghalya –Balat, and Kalaichar, were in operation and four others, — Ryngku, Nolikata, Bholaganj and Shibbari — were getting ready for inauguration.In Tripura, none of the two “Border Haats” have resumed their operations.

While the people of Tripura were excited about the announcement of setting up of two new “Border Haats” at Kamalpur (in Dhalai district) and Palbasti (in north Tripura district), they are yet to see much progress.

A senior official of Tripura’s Industries and Commerce Department said that the state government has proposed to the Union Ministry of Commerce and Industries to sanction eight more “Border Haats” along the state’s border with Bangladesh to promote the trade of local and selected commodities.

The official said that the Union Ministry on an average sanctions Rs 2.50 crore against the project cost of around Rs 5.30 crore for each of the “Border Haat”.

The first “Border Haat” started functioning on July 23, 2011 at Kalaichar (India)-Kurigram (Bangladesh) in the West Garo Hills of Meghalaya.

These markets, spread in around 5,625 sq.metre area of the two countries’ territories or “no-man’s land”, operate once a week on a fixed day.

In the weekly market, on an average, at least 25 vendors including women from both sides of the border sell their products.

(Sujit Chakraborty can be contacted at [email protected])