Madrid, Aug 16 : Real Betis, Atletico Madrid and Villarreal Share the leadership of La Liga following the first round of matches, after the three sides kicked off the season with 3-0 wins. 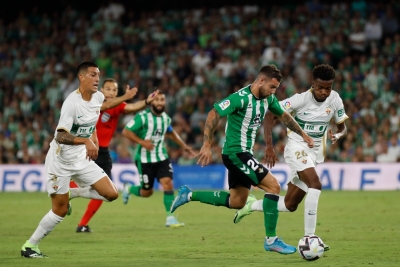 Betis beat Elche after their job was made much easier by the sending off of Elche defender John Chetauya after just 15 minutes for a professional foul on Aitor Ruibales.

Borja Iglesias opened the scoring for Betis in the 27th minute, and last season’s top scorer Juanmi kicked off the season with two goals in the 38th and 59th minutes, as the home side enjoyed an easy win, reports Xinhua.

Alvaro Morata celebrated his return to Atletico Madrid from Juventus with two goals as his side opened the season with a 3-0 win away to Getafe.

Joao Felix supplied both assists for Morata, before Antoine Griezmann completed the scoring with a left-foot shot with 15 minutes left to play.

Athletic Bilbao couldn’t start Ernesto Valverde’s third spell in charge or celebrate Iker Muniain’s 500 appearance for the club with a win, despite having over 20 shots and hitting the woodwork twice at home to Real Mallorca, whose keeper Predrag Rajkovic had a brilliant debut with several important saves in a 0-0 draw.

On Sunday, second-half goals from Lucas Vazquez and David Alaba saw Real Madrid fight back from conceding an early goal to win 2-1 away to newly-promoted Almeria.

Carlos Soler’s second-half penalty allowed Gennaro Gattuso to begin his spell as Valencia boss with a 1-0 win at home to newly-promoted Girona, although Valencia had defender Eray Cormet sent off early in the second half.

Saturday saw FC Barcelona kick off the new La Liga season with a disappointing 0-0 draw at home to Rayo Vallecano, whose keeper Stole Dimitrievski only had to make two difficult saves.

Sergio Busquets was sent off in injury-time to complete a disappointing evening for Barca in a full Camp Nou.

Villarreal spoiled Real Valladolid’s return to the top flight, with second-half goals from Nicolas Jackson and Alex Baena giving Unai Emery’s side a 3-0 win in the Jose Zorrilla Stadium.

Joselu’s 98th-minute penalty saved a point for Espanyol away to Celta Vigo, who had led 2-0 through Iago Aspas and Goncalo Palencia, only for Edu Esposito to pull a goal back in the 72nd minute penalty and set up the late drama.

The new season began on Friday night with Osasuna winning 2-1 at home to Sevilla thanks to Chimy Avila’s ninth-minute header and Aimar Oroz’s 74th-minute penalty, with Rafa Mir scoring for the visitors.