Kiev 18 August : A group of three Vessels carrying 33,000 tonnes of wheat, corn, as well as sunflower oil left from Ukraine on Wednesday according to the Ukrainian Sea Ports Authority said.So so far there are an average of 24 Vessels have left Ukraine under a Grain agreement which was signed in on July in Turkey, Xinhua news agency reported. 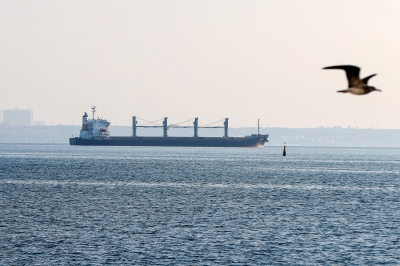 On Wednesday, five Ships arrived at Ukrainian ports to load that are expected to bring more than 70,000 tonnes of bran, wheat sunflower oil, corn and bran to markets around the world.

Ukraine is aiming to meet a goal to handle around 100 Vessels per month in its Black Sea ports, which allows exports of around 3 million tonnes of grains and other food products.

On the 22nd of July, Ukraine and Russia separately signed a contract with Turkey as well as the United Nations in Istanbul to restart fertilizer and food deliveries via Ukrainian ports to markets around the world through the Black Sea.

On August 1st the first cargo vessel transporting grains quit Odesa, the Ukrainian port of Odesa to go to the port of Tripoli in Lebanon.