Ayodhya (UP), Jan 17 : The Shri Ram Janmabhoomi Tirath Kshetra Trust has reportedly dropped their plan of building a museum at the Ram Janmabhoomi campus in Ayodhya, mainly due to security reasons. 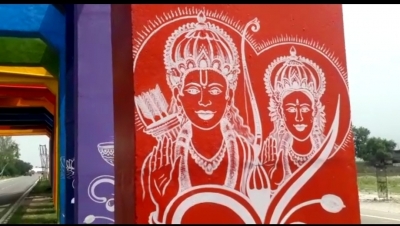 According to a member of the trust, “A large number of devotees are expected at the Ram Janmabhoomi once the construction of the Ram Mandir is completed.Therefore, ensuring the security of the campus will be a daunting task.”

The trust had earlier planned to construct a museum — housing Ramayan-era artifacts — at the Ram Janmabhoomi campus.These artifacts were recovered when the campus was dug up 50 feet deep for laying the temple’s foundation.

The temple trust’s move to drop the idea of the museum comes in the wake of the state government beefing up security at the Ram Janmabhoomi campus after the Centre received inputs regarding a possible terror attack.

Instead of developing a museum, the temple trust has now proposed to acquire the Ram Katha Sangrahalaya near Naya Ghat.

Nripendra Misra, chairman of the trust, has already written a letter to the state government requesting the handover of the Sangrahalaya to the trust.

At present, the Ram Katha Sangrahalaya is under the state government.

Dr Anil Mishra, a member of the Trust, said that a large number of Ramayan-era artifacts were recovered from the temple campus when its foundation was dug-up in September 2020.

All of them are under the custody of the divisional commissioner of Ayodhya.

Significantly, around 150 of the Ramayana-era artifacts — which were recovered during Karseva by Vishwa Hindu Parishad in July 1992 — are showcased at Ram Katha Sangrahalaya.

Apart from an attempt to get custody of these artifacts, the trust has also identified 11 historic structures inside the Ram Janmabhoomi campus that will be preserved and restored in their original form.

The structures identified for restoration include — Kuber Tila, Sita Koup, Sita Rasoi and Nal, Neel, Angad, and Sugreev Tila, among others.

At present, around 60 per cent construction work of the Ram Temple in Ayodhya has been completed.The idol of the deity is scheduled to be installed at the sanctum -sanctorum on Makar Sankranti next year.

Thereafter, devotees would be allowed to pay obeisance to the deity.