Patna 9 Aug : RJD leader Tejashwi Yadav who is widely regarded to be Bihar’s next Vice Chief Minister of Bihar on Tuesday claimed that the BJP of seeking to dismantle the Regional party system in all. “BJP National President J.P.Nadda said that his party will eliminate Regional party in Bihar.Bihar is the birthplace of democracy, and the BJP President has stated that his party would ruin the Democratic process.People of Bihar will not tolerate this. 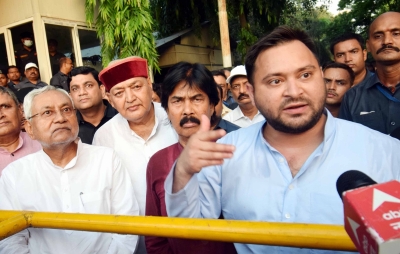 The current development is a proper response to this,” he said during an informal press conference with Nitish Kumar who has resigned as Chief Minister to stake a the claim to form the new government.

“After the JD-U split from the NDA, BJP is not left to itself in the Bihar Vidhan Sabha but also in north India.

Except for Uttar Pradesh, you can observe that there are no coalition partners in Punjab, Himachal Pradesh, Delhi, Chhattisgarh, Rajasthan and West Bengal,” he declared.

Tejashwi Yadav announced the Nitish Kumar will continue to be the Chief Minister of Bihar.

“He has performed exemplary work in the interests of Bihar as well as Bihar people.There is no way to forget the works performed by him.We have disagreements like any family.Let those things go.Uncle (Nitish Kumar) and nephew (Tejashwi Yadav) joined hands and are determined to working in the interests of the common Biharians.of Bihar,” he declared.

“Nitish Kumar took a bold step to separate his party from NDA and he deserves to be praised for his decision.Today is a historic day since the Quit India movement was also declared on the 9th of August 1942.

The message of today is crucial for the leaders of every political party in the opposing camp.If we unite and stand up against communal forces such as BJP and RSS We will eliminate them from the country.

“At this moment, the citizens of the nation are greatly affected by the rise in prices of every product, the rise in unemployment and communalism, as well as national security and the weak economy of the nation.The BJP government is the one responsible for this.Presently, China acquired Indian territories and is developing villages.What’s the solution?” Tejashwi Yadav asked.

“We are socialists and we will not let our Heritage to be taken by anybody else.We have been fighting against forces of the communal right since the very beginning.

Remember the fact that Lalu Prasad stopped the Rath Yatra of LK Adwani in Bihar,” he said.

At the press conference near his residence, 1 Anne Marg, Nitish Kumar stated: “The way BJP was trying to undermine our party We have discussed these issues with our MLAs, MPs and MLCs and each suggested that I resign from the NDA.We’ve heard their suggestions and I quit my position of Chief Minister.”

Asked if he could be a the prime minister’s nominee in the next Lok Sabha election, he declined the question with smile, simply saying to leave it all.

“We will collaborate with the 7-party government in Bihar and we have the support of 165 MLAs.

We will undertake development work in the interests of Bihar,” he said.