Jammu, Jan 24 : The Srinagar-Jammu National Highway remained closed for just eight hours in total, as against 220 hours in the previous winter, an official said on Tuesday, adding no full day was lost in the last two years due to closure of the highway. 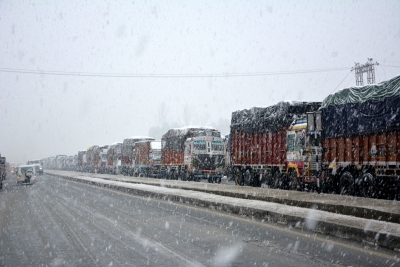 Jammu and Kashmir Chief Secretary Arun Kumar Mehta on Tuesday chaired a meeting to review the status of development of different roads and highways connecting different parts of the union territory.

“The meeting was informed that this winter the Srinagar-Jammu National Highway remained closed for just 8 hours in total as against 220 hours in previous winter.No full day was lost in the last two years due to the closure of NH.In order to ensure movement of traffic on both the sides of the highway, the T5 tunnel will be dedicated to the public on March 15, and Jaiswal Bridge on February 15,” a statement said.

Mehta impressed upon the officers to ensure that there is smooth movement of traffic on the National Highway during the winters.

He asked them to be ever ready with the requisite men and machinery to deal with the weather vagaries.

He stressed minimising disruptions and ensuring that traffic movement remains uninterrupted throughout the year.

He reiterated that traffic on this National Highway should move in both ways after March 15 as much of the bridges and tunnels being constructed would be completed by then.

He enjoined the officers to focus on the difficult stretches between Banihal and Ramban.

He urged them to take instant measures in case of inclement weather.

He took note of the under construction bridges at Maitra, Ramban and one at Jaiswal.