Chennai 15 August : The Actors Rajinikanth, Kamal Haasan joined many of others from south Indian film industry on Monday in sending the residents of the nation a joyful 75th Independence Day.Rajinikanth on Monday , took on Twitter to wish all a Happy Independence Day.The actor asked people to honor and pay tribute to freedom fighters and martyrs during this Independence Day by having their children Carry the national flag in front of their workplaces, offices, and homes.He asked people to fly the National flag on their offices and homes in a sign of respect for freedom fighters and to show a sense of unity. 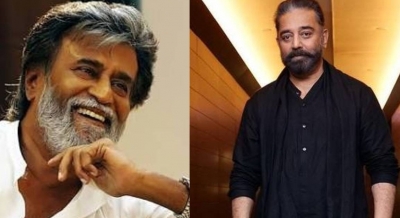 Kamal Haasan also expressed his wish to the people of India for the best of luck on Independence Day.On the Sunday of Independence Day, the actor when expressing his Independence Day wishes, had warned that ignoring our history could lead us back to our past.He declared: “Let us take a vow not to forget our history.Let us remember with gratitude for the sacrifices of those brave freedom fighters of the past, and the soldiers of the three forces that stand at our borders to allow us to commemorate this day.Courage and sacrifice are a must for everyone.Let us encourage these.”

Scores of other Actors also sent greetings to the nation on Independence Day.

Actress Aishwarya Rajesh who was one of those who sent out a message to the masses a happy Independence Day, wrote on Twitter: “This Independence day, we should be mindful of with gratitude for the sacrifice of many freedom fighters who selflessly sacrificed their lives for the cause of our freedom! Happy Independence Day!!”

Political and actor Khushbu, in her Independence Day post, wrote: “As we celebrate the 75th anniversary of Independence Let us remember each one of those who have given their lives to protect freedom.We must not forget the heroes who may have never made it onto the pages of history, but their contributions can’t be overlooked.”

Actress Adivi Sesh in his Independence Day post said: “It’s been my life’s work to attempt to recreate the spirit of Major Sandeep Unnikrishnan, a hero of India.As we celebrate the 75th anniversary of our Independence I salute all warriors, in song and unspoken who have fought to bring our great nation to become that it is today.”