Bengaluru 5 Aug, Bengaluru : In response to the remarks of Rajya Sabha Opposition leader MallikArjun Kharge, Union Minister for Parliamentary Affairs, Mines and Coal, Pralhad Joshi on Friday stated that Congress leaders Sonia Gandhi and Rahul Gandhi did not Cooperate in the investigation conducted of the Enforcement Directorate (ED).Kharge said earlier that how can they be involved in the debates in parliament in the event that the ED conducts an investigation during the session of parliament. 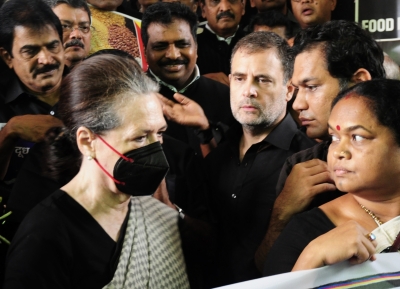 Pralhad Joshi asked if Congress leaders lent their support to Sonia and Rahul Gandhi were summoned by the ED for an investigation even though the session was not in place?

Joshi stated that the goal of the Congress is that there shouldn’t be any investigation in the first place.Sonia and Rahul Gandhi approached the High Court, Supreme Court and Tribunal to request a stay of the probe of the ED but they didn’t receive a stay.

Joshi stated that Kharge is the chief executive of Young Indian, which plays a major role play in illicit money transfers.

In this context, Kharge was summoned by the ED.

Because MallikArjun Kharge is in public life, he is required to Cooperate with the agencies that investigate.Kharge is apprehensive about what he can do to ensure he is summoned during the session of parliament is required to come forward and provide details of the cooperation he has provided for the smooth operation of the parliament? When ED summonses are handed out to Sonia Gandhi and Rahul Gandhi, Congress leaders have disrupted the session of the parliament, Pralhad Joshi stated.

“We should not learn from those who put an Emergency on our nation.

In the days before the Congress was created, Democratic values were not considered,” he said.

Today, all justices have been unable to accept the appeals of Congress.Congress.The party isn’t showing confidence and faith in the judiciary.

Is this not an anti-Democratic decision? Joshi declared on his social media.