Mumbai 15th August : In celebration of India’s Independence filmmaker Kireet Khurana has animated the Preamble of the Indian Constitution, which is voiced by Shabana Azmi.She brings immense emotionality in the Preamble that begins with the powerful words: “We, The People Of India.” and continues to affirm the principles of Justice Liberty, Equality, Liberty Unity and Integrity.Shabana Azmi: “The Preamble will always remain significant as a promise we made to our self and to our country.It is an affirmation of India that was envisioned by the authors of the Constitution after much thought and taking into consideration the variety of the Indian population.” 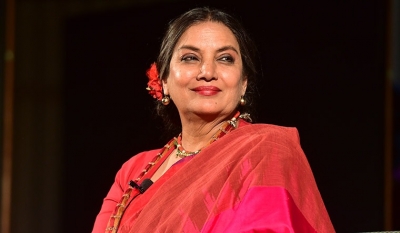 “But Javed Akhtar once said, “Meelon ho aa gaye.meelon humein jaana hai” (We have reached this point, but there are miles to be traveled).)’.”

Khurana’s knowledge of India and its inhabitants is vast and deep and his highly acclaimed documentary “The Invisible Visible,” which focuses on the 70 million homeless in India was recently awarded the Best Documentary Feature Award at the Swedish Film Festival.

According to Kireet: “The Preamble is possibly the most poetic document of any Constitution.The year 1947 was a time when India was deeply entangled in casteism and poverty and bigotry, as well as classism and ignorance.”

“For the founding fathers to have an aspirational document that represented equality, justice and fraternity, regardless of creed, caste status, or religion is a great feat of foresight and a sense of optimism that India must be able to live up to.”

“There are many that are unaware of their Constitutional rights, and perhaps looking at the Preamble in the form of a picture can help them understand the significance of the debates in the media and help them be aware of the meaning of being Indian.”

It’s a full circle event for Kireet who’s father, Bhimsen Khurana, best known as the pioneer of Indian animation, produced an animation called ‘Ek Aur Ekta’ in 1974.The message “Hind Desh Ke Niwasi Sabhi Jan Ek Hain,” was also a reflection on the values that are which are enshrined in the Preamble of the Constitution.

Kireet states: “The Preamble serves as an inspiration to every one of us, and gives us a reason to be solid, united, and to respect the linguistic and cultural diversity of our nation.”

“With the recent rise of conflict in our society, it is essential to discuss the issues in an open and respectful way and resolve our disagreements through Democratic and constitutional methods.”

Kireet states: “In 1947, we were a poor nation and we should be grateful for the incredible strides we’ve achieved and commemorate the wonderful 75 years which have placed India in the top 10 countries of the world.”

“We have an extensive road ahead but the foundation that was laid by our founding fathers is strong and hopefully will continue to remind us of the power of unity in diversity.”