Chennai, Dec 18 : ‘RRR’ director S.S.Rajamouli has chosen to describe National Award-winning Tamil actor Samudrakani, who plays a supporting role in the director’s upcoming pan-India film ‘RRR’, as someone who is “very kind and soft”. 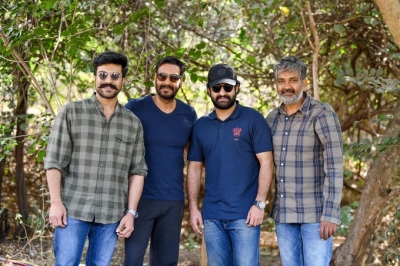 Talking to IANS, Rajamouli said, “The funny thing was I would always try to speak to him in my broken Tamil and he would say to me, ‘It’s okay sir, you can speak to me in Telugu as I can understand Telugu.'”

“I would tell him, ‘I get very few chances to speak in Tamil and it is only with a few people like you that I can brush up my Tamil.Otherwise my Tamil will be completely gone.’ He used to patiently wait for me finish my broken Tamil sentences and then figure out what I was trying to say.” “He is a very nice and accomodative Person,” the director said and added that Samudrakani would wait patiently even if his shots were scheduled late into the nights.”He is a very down-to-earth Person and we were very happy to have him on board,” said Rajamouli.mani/kr

Samudrakani, a soft-spoken and kind person.

Rajamouli is the National Award-winning actor

He would say, “It is very rare that I get to learn Tamil.It is with people like you that my Tamil can be improved.My Tamil skills will soon be lost.His patience was a gift.

He would wait patiently for me to finish the broken Tamil sentences, and then figure out my meaning.The director stated that Samudrakani is very accommodating and friendly and said that he would be patient even though his shots are scheduled for late at night.

Rajamouli said, “He’s a down-to earth person.We were happy to have him aboard.”