Dharamsala, Aug 5 : Amid the rising tension between Russia and Ukraine, a Russia-origin Israeli has tied the knot in Hindu traditions with his Ukrainian Girlfriend in this Himachal Pradesh hill town that is the abode of Tibetan spiritual leader The Dalai Lama. 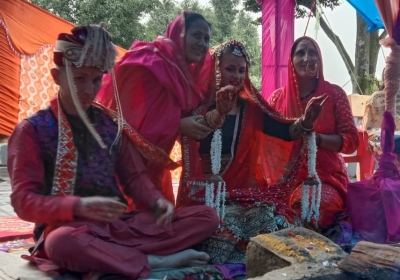 Russian national Sergei Novikov, who has been staying here for over a year, married his Ukrainian Girlfriend Elona Bramoka in a traditional Hindu ceremony this week.

Wearing a red and gold lehenga, Elona solemnized marriage with Sergei, who was dressed in a maroon kurta-pyjama and Nehru jacket at a Hindu temple at Kharota village near here. 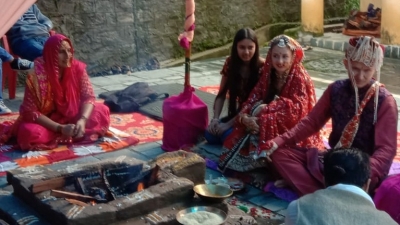 The couple has been living in Dharamkot village, known as mini Tel Aviv, for over a year.

At the wedding, the couple had local guests and friend from abroad, who were dancing to local folk music and relished a Kangri Dham (local food).

Dharamsala — the political, cultural and spiritual hub of the Tibetan diaspora — in Kangra district supports around 16,000 exiled Tibetans and an equal number of Indians.