Jaipur, Nov 29 : The Rajasthan unit of Bharatiya Janata Party (BJP) will “deliver a message of solidarity” on December 1 amid talks of differences between the two factions of the party — belonging to that of former Chief Minister Vasundhara Raje, and state unit president Satish Poonia, a party source said on Monday. 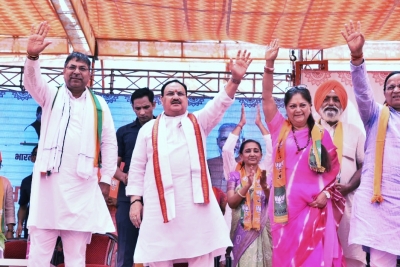 Members of both ‘camps’ of the party including Poonia and Raje among other senior leaders would be present on the occasion to present a “united face” of the party in the presence of BJP national president J.P.Nadda who would flag-off 51 chariots to mark the ‘Jan Aakrosh Yatra’, said party officials.

Nadda is scheduled to hold a public meeting in Jaipur on December 1.

He will visit Rajasthan to flag off the ‘Jan Aakrosh Rath Yatra’ against the Congress government.

More than 10,000 BJP workers and people will gather in the programme.

All the leaders of BJP Rajasthan Core Committee will participate in the programme of the National President.

The BJP during the event is expected to raise the issue of crisis in the state Congress leadership.