By Niharika RainaNew Delhi, Dec 1 : The lack of runs from Rishabh Pant’s bat in white-ball cricket for India in the recently-concluded series against New Zealand has led to a widespread debate on whether the left-handed batter should continue to be in the limited-overs scheme of things. 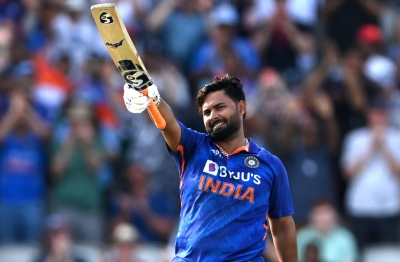 On the ability to pull off unorthodox shots in white-ball cricket, Pant made his India debut in T20Is in February 2017, and got his ODI debut in October 2018, two months after entering the Test cricket arena.

For someone who was perceived to set the world alight in white-ball cricket, Pant currently is more of a sure starter in India’s Test eleven than in ODIs, and T20Is, as seen from scores of 6, 11, 15 and 10 in New Zealand.

Former India wicketkeeper-batter Saba Karim, who gave Pant his debut T20I cap at Bengaluru in February 2017, believes that the left-hander has to bring clarity in mindset while playing Tests to the white-ball matches for succeeding in limited-overs cricket.

“I am sure you would have heard so many experts talk at a length on Rishabh Pant’s failure to convert the kind of performances we have seen him do in Test matches (to the white-ball formats).That’s the kind of work as an individual Rishabh Pant has to put in.

“When he goes out to bat in Test matches, there is far more clarity in his mindset and the way he approaches the game.That’s the kind of clarity he needs to bring in white-ball cricket also,” said Karim in a select media interaction facilitated by Sony Sports Network.

While Pant averages 43.32 in Tests, it comes down to 34.6 in ODIs and 22.43 in T20Is.Karim was also quick in pointing out that Pant had shown attributes of succeeding in white-ball cricket, citing his unbeaten 125 leading India to chasing 260 against England in the ODI series decider at Manchester.

“Having said that, he performed quite well, sometime back against England, where he scored that match-winning hundred.So, if you are capable of doing that, what is required from Rishabh at this stage is to have more consistency in his batting exploits.I do expect him to come good because he has incredible talent and he can always be a match-winner for India.”

In India’s upcoming ODI series against Bangladesh, Pant will be facing competition from Shreyas Iyer, who is in fantastic form in 50-over matches this year and a returning KL Rahul, who bats at five, as a finisher, whenever the side fielded a full-strength playing eleven in the format.

Karim remarked that his preference would be to pick Iyer and Pant ahead of Rahul as India’s middle-order for ODIs against Bangladesh.”Playing all three (Iyer, Rahul, Pant) seems difficult.When you have Virat Kohli coming back in the eleven, he will bat at number three.

Then suppose you put Shreyas Iyer at number four, then you are left with only two spots.As of now, India are now looking to have that sixth bowling option from your number one to six.”

“If that is the case then that leaves very little space for one more middle-order batter to come in.That’s a call which the Indian team management has to take.I’ll look at Shreyas Iyer because he has done very well in the New Zealand series.He should come in and occupy the number four spot.Then you are left with Rishabh Pant at number five and then you need to have one more bowling option at number six.”

So, where does Rahul, the designated vice-captain for the Bangladesh series, who averages 56.62 in 10 innings in the middle-order at a strike-rate of 113.81, including a century and four fifties, fit in the India playing eleven?

According to Karim, Rahul is a back-up option to the opening pair of Shikhar Dhawan and Rohit Sharma, though he wishes for the team think-tank to get the right-hander’s role sorted in the set-up quickly.”I look at him more as an opening alternative to Shikhar Dhawan and Rohit Sharma.He’s done well as an opener for India and is such a classy player.It’s just a matter of time when he can strike form.Having said that, I really don’t know at what number he will come in.

“If not as opener, do we use him in the middle order? If we do, can we give him a long rope there because there are so many other contenders in the frame.That’s the kind of ambiguity I see in the current 15.This is something that needs to be settled as soon as possible by the captain and the team management.”